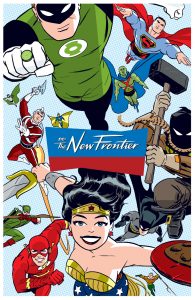 Darwyn Cooke had a vision of the DC Universe that was uniquely his own, yet embraced by everyone. Once you saw his timeless designs and concepts for Batman, Catwoman, Superman, Wonder Woman, Green Lantern or any other character, you immediately adopted his jubilant interpretation of these heroes as your own and wanted more. His take on the most iconic heroes in the world were breathtakingly direct and elegant, powerful and cool.  His were some of the most beautiful, fun DC superhero images we have ever seen.
“Darwyn Cooke lived life like a character from a Micky Spillane novel, a throwback to a bygone era that was, more than occasionally, reflected in his work,” said DC Comics Co-Publisher Dan DiDio. “He was both compassionate and combative, approaching everything he did with a tenaciousness and temerity that is now unheard of in a world afraid to offend. The simplistic brilliance of his art and the natural flow of his storytelling not only elevated but enhanced all projects he touched and his passion and love of comics was reflected in every panel of every page. Working with Darwyn was not without its challenges. There were times we’d spend hours arguing over story then go months without talking, but we always found our way back, drawn together by the common bond and friendship comics creates. This is an industry-wide loss that I feel personally, but the sadness is mitigated in the knowing that the beauty and grace of his art will forever stand the test of time and be a monument to all that is great about comics.”

Darwyn was one of our medium’s true innovators. A gifted artist and master storyteller, Darwyn began his career as a magazine art director and graphic designer.  After answering an ad placed by Warner Bros animator Bruce Timm, Darwyn entered the world of animation, where he contributed to such shows as Batman: The Animated Series, Superman: The Animated Series and Men In Black: The Series.  From there, Darwyn made the leap into print comics, where his character design was never more effective, enduring or entrancing. It was the look and honest simplicity of his characters for which Cooke became famous—as first seen in his breakout work Batman: Ego published over 15 years ago today and then followed up by his popular and critically acclaimed work on Catwoman: Selina’s Big Score and The Spirit.  Even after 15 years, Darwyn’s design for Catwoman is still the one used today in both comics and inspired the look for Catwoman on the hit TV show, Gotham.

An Eisner-award winning artist and accomplished writer, Darwyn has been a much-loved and respected member of the comics community.  He lent his signature retro style to all corners of the DC Universe, from Jonah Hex to Before Watchmen to Vertigo Comic’s The Twilight Children and, of course, his master work, DC: The New Frontier.  His bold, direct style, often compared to the works of Joe Kubert, Alex Toth and Jack Kirby, reflected his down to earth, no nonsense personality.  Darwyn Cooke always claimed that he was a lucky man to have such a wonderful family, friends, and such a wonderful life. He lived that life with the same brilliance and fearlessness that so permeated his work.  And for those of us who knew this one-of-a-kind and genuine soul, we were lucky as well.