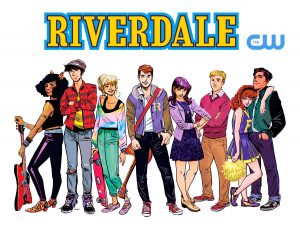 It’s official — the world’s most popular teenagers are finally coming to television this fall on The CW’s ‘Riverdale,’ a one-hour live-action drama based on the classic Archie Comics characters.

“This is a historic moment for Archie Comics – and I couldn’t be more proud,” said Archie Comics Publisher and CEO Jon Goldwater. “It’s a culmination of my time here, and I’m eager to see Greg Berlanti, Roberto Aguirre-Sacasa, The CW, Warner Brothers Studios, and the cast bring Riverdale to viewers every week. My promise to fans? You ain’t seen nothing yet.”

The show will be written by Archie Comics Chief Creative Officer Roberto Aguirre-Sacasa and produced by Warner Brothers Studios and Berlanti Productions and has been described as a subversive take on the classic Archie mythos. Greg Berlanti, Sarah Schecter, Jon Goldwater, and Roberto Aguirre-Sacasa serve as executive producers.