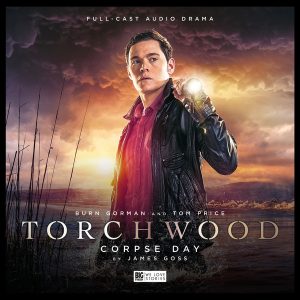 Scratch at the surface of most towns and cities and you’ll find a cesspit of lies, greed, deception and numerous illicit vices because…Well because human nature is the same the world over.  It’s an unexplored morass of unbridled dark desire and secrets that even at the best of times is barely contained and constrained. In Cardiff however, thanks to the influence of the rift and the things that pour through it, the normal rules don’t apply and all of the worst fantasies that haunt the blackest nightmares of its denizens have a way of seeping out and manifesting themselves in the hidden hallways and basements of the sprawling metropolis.  And on Corpse Day when the local Police force and Torchwood join forces for a brief annual alliance in order to solve the coldest and hardest of cases, PC Andy Davidson and Owen Harper end up becoming subsumed by  one of the most terrifying mysteries that either of them have ever encountered.

Having become the most unlikely duo since Dean Martin and Jerry Lewis decided to team up and assault Hollywood, Owen and Andy – while investigating the disappearance of a number of local girls – become trapped in a stygian The Hills Have Eyes meets Deliverance with a dash of The Texas Chainsaw Massacre thrown in for good measure, urban “myth” involving monsters, a crazy old man, the Committee and a gaggle of institutionalized, Stockholm syndrome infected “brides”. Corpse Day is brutal, haunting, horrific and shot through with pitch-black humour and throughout it’s duration the “terrible” twosome are confronted by the kind of insanity that never takes no for an answer. Burn Gorman and Tom Price are fantastic as the odd couple who take centre stage in Corpse Day and Nigel Betts as the as bonkers as the day is long villain of the piece, brings the idea of the monster lurking in the suburbs to frighteningly realistic life in James Goss’ tremendous, and ever so slightly disturbing story that explores ideas of life and death and how they’re viewed, with perspective being altered and defined by circumstance, differently by everyone. And it’s also a pretty darn good horror story that would scare the excrement out of anyone foolish enough to listen to it around a campfire in the middle of the woods and would, if the celluloid gods ever optioned it, make a more than satisfying, and intelligent, slasher film. Fiendishly good… Tim Cundle