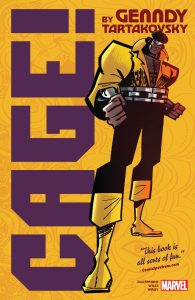 Yeah baby, why don’t you hip and happening folks just step aboard this out there time machine and just take a journey back to the seventies Harlem with the baddest cat in all of the Big Apple, Luke Cage. That’s right, I’m talking about visiting the dude who’s taken to laying the smack down on all the worst jive ass turkeys that New York’s mean streets have seen fit to throw his way. In Cage! he’s not only breaking faces and taking names on his home turf, he also does it half-way around the world in the secret lair of some freaked out scientist who’s been kidnapping capes and crusaders to fight against his gene spliced creations in a hair rising, bone snapping, brawl until you fall, winner takes all bare knuckle contest.  And it’s a competition that Cage has to emerge victorious from if he and all of his super-powered friends have any chance of escaping from their mysterious captor and returning to the city that’s so good they named it twice.

Set in ninety seventy seven, Genndy Tartakovsky’s Cage! is imbued with, and reeks of, seventies cool. Don’t be fooled by how slim this volume looks, thanks to its sheer awesomeness it weighs more than a small moon, although by just touching it you end up sharing Cage’s super-strength so, you know, you’re able to pick it up, read and enjoy it just like you would a normal, far inferior book. Tartakovsky’s story is a frantic, mind bending mixture of Enter the Dragon, Shaft in Africa and The Island of Doctor Moreau that’s immediate, funny, engaging, and steeped in nostalgia, that thanks to the creator of Samurai Jack’s (yes, that’s right kids, he’s that Genndy Tartakovsky) instantly recognizable style looks like a glorious LSD fuelled mixture of The Freak Brothers, Ren and Stimpy and Robert Crumb in which you’ll lose yourself, mind, body and soul, entirely.  Cage is back and he’s still the baddest cat on the whole damn block. Believe that baby… Tim Cundle