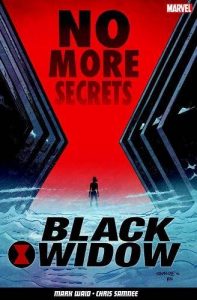 You know those days when even though you try your utmost to do the right thing by, and for, everyone, it feels like the whole world is, every step of the way, conspiring against you?  Well, multiply that feeling by every single day and imagine it was real, and that’s exactly what Natasha Romanova’s life is like in No More Secrets. On the run from S.H.I.E.L.D., battling against the nefarious mother and daughter who now run the Red Room (the institution that transformed Natasha into the Black Widow) and its latest set of graduates, and having to deal with a pair of psychotic mutants hell-bent on gaining a modicum of revenge on the Black Widow for one of the many crimes of her past, things have certainly been easier for Natasha than they are in No More Secrets. But you know what they say about the female of the species right? They’re always far more deadly than the male and if you want something doing right, never send a man to do it; always make sure a woman is on the case. Especially if, as Natasha is, she just so happens to be the world’s premier assassin trained in the deadliest martial arts and more forms of combat than most people could even begin to count.  And when the odds are stacked against her, as they most certainly are in No More Secrets, that’s when the Black Widow is at her absolute dangerous, destructive and ruthless best.

Waid and Samnee’s story tales Natasha to the Moon and back, finds her teaming up with some unlikely, and one not so unlikely, allies, sees her betrayed, beaten, pursued to the ends of the Earth (well, some really remotes parts of it anyway) and forced to fight for her life, for S.H.I.E.L. D., for the millions who would die if she fails and for those who think of themselves as her enemies. No More Secrets doesn’t ease off, or let up, from the word go and is a full throttle, cold war style thriller that just happens to feature some super-powered folks in which the future of world is dictated by the sins of the past and the need for Natasha to balance the books.  Chris Samnee’s gritty, noir styled art captures the feel, tone and pace of the tale perfectly and the forthright, hammer blow story telling that’s comprised of equal parts action, espionage and razor sharp characterisation and dialogue does the same for Natasha Romanova, trapping everything and all that she is within its pages. It’s time to enter the Widow’s lair… Tim Cundle