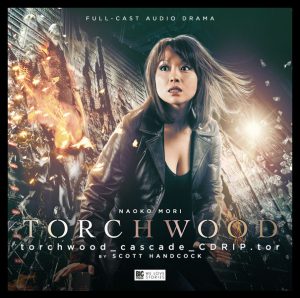 The internet is a dangerous place. Oh, we’ve all heard the horror stories about, and are aware of, the dark web, that insidious, hidden world in which all manner of nefarious, criminal endeavour is conducted, but in Cascade that’s nothing compared to the real jeopardy that awaits anyone foolish enough to download illegally from a certain torrent site. Having detected an unusual pattern in deaths across the globe, and having strayed in over his head, Stephen, an old “friend” of Tosh’s, begs her to help him make sense of, and stop, what he’s discovered before it claims him as its latest victim. Immersing themselves in what he’s found, Tosh and Stephen are soon made incredibly aware that there’s something lurking in the digital torrents that share all manner of entertainment. Something that doesn’t like those who break the law and punishes them for their infractions, no matter how small, in grim, grizzly and incredibly final fashion. So it’s left up to Tosh to stop the ‘virus’ from spreading further than it already has in its attempt to stop internet piracy for good, a mission that she’s more than willing to see through to the bitter end. After all, even though she may never say or share what it is and how and if it’s going to work, Tosh always has a plan.

It’s always nice to hear the quiet “man” of Torchwood Three, Tosh, in action, especially when she’s getting to grips with something that’s most definitely, and firmly, in her wheelhouse.  The sound design and discordant, stuttering and non-linear set up of Cascade lends it an unnerving, uncomfortable, jarring and slightly unnatural feel, which in turn cranks up the fear and suspense dials and helps it to creep into every recess of your mind.  Exploring the ramifications of digital piracy and postulating what might happen if the punishment for infringing copyright law was actually a very real, tangible threat and built around a truly upsetting and heartfelt tale of unrequited love, Cascade is a little off the beaten track and slightly weird even by Torchwood’s standards, but ultimately, is also a hugely satisfying and rewarding drama. Fantastically performed and written, it’s one of those stories that linger long in your imagination, haunting your thoughts with the possibility that there might just be something out there, patiently waiting for someone to click on the link that will set it free. The internet really is a dangerous place… Tim Cundle