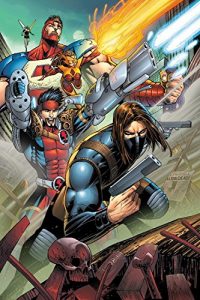 Whether we want to admit it or not; at some point in our lives we’ve all rooted for the bad guy. We’ve all praised acts of subversion against the state, supported the underdog in his or her struggle against the forces of corporate stagnation and dreamt of lashing out against the stifling oppression, normality and boredom of society, and the seemingly endless petty rules that ensure that the vast majority of us remain focussed on doing the ‘right thing’. We’ve all thought about crossing that line, but most of us never will and that’s why we all openly, or secretly, love the people who do. Which is almost certainly why reading the Thunderbolts (former supervillains trying to atone for their past actions by standing in harm’s way) is so instantly gratifying, and probably why the team are so effortlessly cool. Just like you, me and everyone else, the Thunderbolts are flawed. They don’t conform to the traditional superhero stereotypes; these are broken people trying to make sense of their lives and, ultimately, who they are. And, in an attempt to try and readjust the balance of their destinies, have decided to dedicate themselves to a higher calling. It isn’t easy, this whole being good thing, and there are more bumps than smooth surfaces on the road that they’re now travelling down, but that’s what makes the Thunderbolts so interesting. Because it isn’t easy for them, they are tempted and they now and again, they do fall off the straight and narrow wagon now, and they make mistakes simply because they’re human. They’re not superheroes, they’re something else and that’s why this book will suck you in, chew you up, spit you out and leave you with an excrement eating grin plastered all over your face. That and the fact that in There Is No High Road, the team’s first mission together since they fled the confines of Pleasant Hill at the end of the Standoff saga, they’re now led by the Man on the Wall himself, the Winter Soldier and sharpest, baddest super-soldier in all of Marveldom, James “Bucky” Barnes.  Oh, and they also happen to be the new custodians of Kobik, the sentient cosmic cube and most powerful entity on the planet. It’s a rather potent mix, and like most “families”, they don’t always see eye, but when they do manage to work from the same hymn sheet, the Thunderbolts are, much like an out of control vintage steamroller, unstoppable.

Jim Zub’s tale of anti-heroes on the lam, finds the Thunderbolts “accidentally” becoming the most wanted criminals on the planet after they destroy a secret base full of alien Terrgenesis cocoons, the decimation of which prompts a major international incident with the Inhumans. And with S.H.I.E.L.D. and the Squadron Supreme also hot on their tails, getting caught up in the fallout from Civil War II and all manner of internal squabbling and power-plays (one of which ends with a member of the team venturing toward the mythical white light before being yanked back to reality at the last minute) engulfing them, the Thunderbolts set about trying to be the good guys as best they can. Unfortunately though, their best isn’t quite good enough. Coupled with the achingly sumptuous and detailed artwork of Messer’s Jon Malin and Sean Izaakse, Jim Zub’s tale of the most dysfunctional, and semi-disturbed, superhero alliance in the Marvel Universe is a blink-and-you’ll-miss-it supersonic fusion of meticulously constructed, cleverly executed plot,  snappy dialogue and the sort of consummate characterisation that it takes most writers a lifetime to master. It really is true. Bad guys are more fun…. Tim Cundle