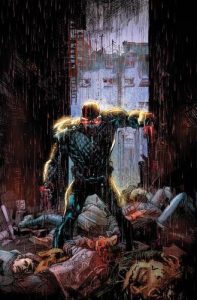 I knew in less than two minutes – and three pages into reading Hates Makes Hate- that I was not only going to love this book, but that Nighthawk was about to smash his way into my all-time superhero top ten.  Why? Because it begins with the masked vigilante beating a group of neo-Nazi white supremacists into the kind of bloody pulp that would win my nomination (if I were giving one that is) for the Turner Prize. And nothing makes me smile more than, or is quite as endearing as, seeing fascists getting pounded into dog food.  Transforming righteous violence into creative art, Raymond Kane (known as Nighthawk to his enemies and Kyle Richmond to the very few friends and family he left behind on the shattered Earth he previously called home) makes Batman look like a primary school teacher and Moon Knight seem like a rank amateur as he wages his one man war against crime on the streets of Chicago. Set against a back drop of real estate greed, arms dealing, the very real reality of modern day racism, and business and police collusion and corruption, Nighthawk tackles similar issues to those that Bendis did in Civil War II, although it does it in a far more direct, brutal and street level way. David Walker’s gritty, down to Earth story has an authenticity and sense of realism that is missing from a lot of comics, as Nighthawk operates outside of the law in order to dispense justice. More like Marlowe than Captain America and more akin in spirit to Shaft than Daredevil, Nighthawk has the same sense of vibrancy, energy and immediacy as Miller’s seminal Dark Knight and James Glicknhaus’s The Exterminator while also sharing their intensely gratifying appeal and similar rewarding final act.

Teamed with the sort of semi-psychotic, sidekick that you wish most avatars of justice would seek out, Nighthawk doesn’t mess around, doesn’t waste any time and goes straight for the jugular. It’s punchy, shocking and incredibly violent, and thanks to the noir flavoured, retro eighties art of Villabos and Morazzo and Walker’s razor sharp dialogue, acute and detailed characterisation and knock-out plot, Hate Makes Hate hits all the right spots and by the time you reach the last page, you’re begging for more. There’s a new sheriff in town. His name is Raymond Kane. Remember it. He is Nighthawk.  He is justice. He is vengeance. And he is the law… Tim Cundle