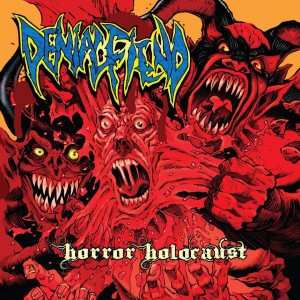 Thrashing, crossover, death super-group DENIAL FIEND re-issue their seminal second album on vinyl and in Europe for the first time!

Originally formed in Florida in 2006 by former Massacre members Terry Butler & Kam Lee, alongside Down By Law guitarist Sam Williams, Denial Fiend‘s gruesome horror themed death, thrash spawned the debut album ‘They Rise’ which was hailed as a cult classic. Three years later after various line-up shuffles Butler and Williams decided to put a new spin on the band, bringing in some classic crossover royalty into their already malevolent sound by recruiting former Accused screamer Blaine Cook and the rhythmical dexterity of D.R.I. sticks-man Rob Rampy. The result was their 2011 masterpiece ‘Horror Holocaust’. Ten tales of blood curdling horror that are anvil heavy thrashing death, but this time given a unique splatter rock injection with Blaine Cooke’s visceral, vocal drawl and Rob Rampy’s pounding drum technique. Originally released only on CD in 2011 in North Amercia this genre defining classic is now being lovingly re-issued on limited edition, splatter/swirl vinyl and there’s a wicked rumour that the beast that is Denial Fiend may rise from it’s deadly slumber and enter the studio once again in the not to distant future….

Brace yourself for the Horror Holocaust!