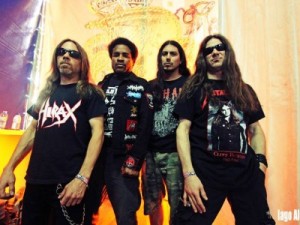 Legendary Californian Thrash Metal Band HIRAX are set to play their first ever UK tour, in the wake of ubiquitous critical acclaim of their fierce, in-your-face fifth studio album, ‘Immortal Legacy’, released in Spring 2014 on Steamhammer / SPV. Dates are:-

‘Immortal Legacy’, which was produced by Bill Metoyer (Slayer, W.A.S.P., Armored Saint, Cirith Ungol etc), features guest guitar players Jim Durkin (Dark Angel), Juan Garcia (Agent Steel/Evildead) and Rocky George (Suicidal Tendencies/Fishbone). Singer Katon W. De Pena states that Bill Metoyer, who HIRAX had already worked with back in the early 1980s on their first two albums, “is a musical wizard and his work on our new album is genius. This is our most epic sounding record to date, sonically powerful and over-the-top. 14 new raging thrash metal songs that will make you bang your head!!! This is probably our most diverse album ever.”

The cover of ‘Immortal Legacy’ is the first oil painting in 25 years by Philip Lawvere, the artist behind such classic album covers as Kreator’s ‘Pleasure to Kill’ and Celtic Frost’s ‘Emperor’s Return’, as well as a slew of thrash metal albums released on Noise Records.
Katon: “We couldn’t be happier to have Philip Lawvere illustrating the cover of our new album; after getting Bill Metoyer to produce it, this is truly the icing on the thrash metal cake!”

Lance Harrison (lead guitars) is Katon’s co-writing partner. “Lance is a riff-writing master and a major force to reckon with! Nicknamed the Shred Baron for obvious reasons. He believes in heavy metal 100%.” His younger brother Steve (bass guitar) is an important part of the HIRAX sound: “Nobody plays bass like him! There is a unique sound and bond between Steve and his brother. As a bass player, he is a true musician.” Last but not least there’s Argentinian Jorge Iacobellis (drums and percussions), a seasoned veteran who plays with tons of heart and soul; Katon: “The best way I can describe his drumming style is loud and powerful.”

Katon states that “Our philosophy has always been to remember where we come from and stay true to our roots. Our fans know that we will never let them down and that they have helped to raise us up to a level with bands such as Slayer, Sodom, Kreator, Exodus, Overkill, Testament, Annihilator and many others.”

Hirax were one of the first bands to emerge from the thrash scene in California in the early 80’s, making their name with their first two storming albums, ‘Raging Violence’ and ‘Hate, Fear And Power’. Splitting at the end of that decade, they made a triumphant return 10 years later and have remained active ever since. Now they’re finally set to play the UK; “It’s about time” laughs Katon W. De Pena, “we should have been there in 1984! We have a big UK fanbase, and even released our first record on a British label – the first thing Earache ever released was a flexi disc we were on! UK fans have been writing to us since the moment this tour was announced so I can’t wait. It’ll be like a homecoming because people have been waiting for three decades now.”