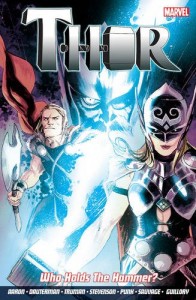 Thor: Who Holds the Hammer? – Jason Aaron, Noelle Stevenson, C.M.Punk, Don Glut, Russell Dauterman, Timothy Truman, Margaurite Sauvage, Rob Guillory & Rick Hoberg (Marvel / Panini)
At some point in life, everyone experiences a ‘long, dark night of the soul’, in which they question everything about themselves, their place in the Universe, the legacy of their life and the impact it has, and will have, on the world. Even superheroes aren’t immune from its embrace and in ‘Who Holds the Hammer?’, it’s Thor’s , or Odinson as he’s now know, turn to feel it’s ice cold fingers clutch at his heart. Following his calamitous encounter with Nick Fury, he’s no longer worthy to wield Mjolnir, which in itself would be a bitter enough pill to swallow, but now he’s forced to watch as another holds the hammer high and as such, has become Thor. It’s almost too much for a Prince of Asagard, former God of Thunder and current superhero to bear, and while he struggles to accept his new role, he’s overcome by his curiosity and need to know who now possesses that which he cannot, and in ‘Who Holds the Hammer?’, Odinson determines to discover the identity of the hero who now calls herself Thor.

He’s not alone in his quest, as the recently returned Odin is also obsessed with finding out who Thor is and taking the power that Mjolnir bestows from her and send the Destroyer (under the control of his psychotic brother Cul) to take back what he believes is his. Which in turn, brings Thor’s supporters it battle, as they fight to defend her and prevent Odin’s ever darker machinations from coming to fruition, and in the process, dividing the power base on Asgard. Which in most books, would be more than enough to keep the reader hooked and on their toes, but ‘Thor’ isn’t most books, and Jason Aaron and Noelle Stevenson know this, and manage to juggle that particular sub-plot with Odinson’s quest and Thor’s “war” against Roxxon, while exploring Dario Aggar’s past and his new born alliance with Malekith. Like I said, this isn’t most books. This is Thor, and this is the kind of compulsive, engaging and intelligent story-telling that we’ve come to expect from the creative team responsible for it, a near perfect fusion of literature and art, which thanks to one my all-time favourite artists, Timothy Truman, adding his always welcome talent to the pool, upping the ante, making it look even better (which I didn’t think was possible) and generally, turning everything up to eleven.

That’s not all though folks, because we also get the CM Punk co-authored ‘Thor Annual 1’, which is an affectionate, and funny, journey through our titular hero’s future, present and past and the Don Glut ‘What If?’ which inspired Jason Aaron’s current run on the book. And yes, before you ask, Thor’s identity is revealed, which unless you’ve been hiding under rock, I’m sure you know, and no, I’m not going to spill the beans. Why? Because (a) I don’t do spoilers, and (b) you need to find out for yourself and the only way to do that (in my humble opinion) is by reading this, frankly extraordinary, book. You know you want to… Tim Mass Movement