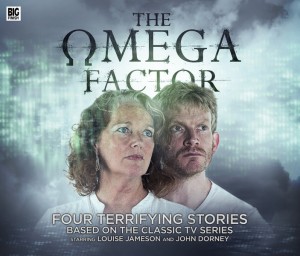 The Omega Factor: Series One – Starring John Dorney, Louise Jameson, Sandra Voe, Alan Cox, Tracey Wiles, Natasha Gerson, Camilla Power, Terry Molloy, Kate Bracken, Georgie Glen, Hilary Maclean, Laura Dos Santos & Derek Hutchinson & Written by Matt Fitton, Cavan Scott, Ken Bentley & Phil Mulryne – 5xCD / Download (Big Finish)
I vividly remember when I originally stumbled across ‘The Omega Factor’, because you never forget the first book that terrifies you, and as such is ultimately responsible for the way in which you react to both literary and cinematic horror. Like most children who grew up in the seventies, I was too young to watch ‘The Omega Factor’ when it was first broadcast, and my initial exposure to it came in the form of Jack Gerson’s novel which I hungrily digested in the early eighties and made me sleep with the light on for three months after I finished it. But it wasn’t until many years later when I finally sat down to watch the series, thanks to the magic of DVD, that I discovered how different the book was from the show, and how much more frightening the series was. That fear that I felt while watching Tom Crane and Anne Reynolds become embroiled in the secretive world of Department 7 and the Omega Conspiracy, was not only replicated when I foolishly spent an evening (oh how I wished I’d listened to it during daylight) in the company of this Big Finish iteration of ‘The Omega Factor’, but was magnified as each of the four loosely linked stories that comprise this first series let their ice cold fingers of dread tickle my imagination, sent shivers up my spine and made sleep nigh on impossible for two nights, as my dreams were filled with horrors from the other side.

The series opens by introducing Adam Dean (John Dorney) to Anne Reynolds (Louise Jameson) following the death of his father, Tom Crane, as he attempts to carry out his final will and testament. From Beyond, brings both characters together just as Department 7 is about to close its doors due to government cut backs, and exposes Adam to the world that that the dad he barely knew was so heavily involved in. It’s a story that slowly builds momentum, one filled with a gradual sense of trepidation, fear and horror, and that sets the tone for the rest of the series perfectly. Following clues in Tom’s old notes, Adam and Anne then find themselves investigating a new age commune with an unhealthy interest in age old Pagan deities in ‘The Old Gods’, before a link to Anne and Tom’s past surfaces in the most unexpected of place in the genuinely disturbing tale of exorcism and things that go bump in the night that is ‘Legion’. With the future of the department at stake, in the closing chapter ‘The Hollow Earth’, Anne and Adam finally find the proof they need to keep the department open in a tale of missing persons and the voracious appetites of the things beyond the veil that sets the hairs on the back of your neck on end and makes every nerve ending in your body tingle in fear.

‘The Omega Factor’ has captured the essence and spirit of the series that inspired it perfectly; re-imaging it for the modern digital age and channelling it into the twenty first century. The writing is wonderful, scary, dark and full of incredible ideas and plots and fantastic dialogue, all of which are served up magnificently by the cast. Louise Jameson and John Dorney are in fantastic form as Anne Reynolds, whose world weariness is tempered only by her need to still believe, and Adam Dean, the hero of the hour. Much as it frightened the living daylights out of me, I hope that there’s a second series, because when something is this good, you just want more of it regardless of how much it made you whimper, shiver and keep looking over your shoulder to reassure yourself that there really was nothing there and that scratching noise was just your imagination. Just don’t listen to it in the dark. Whatever you do, don’t listen to it in the dark… Tim Mass Movement