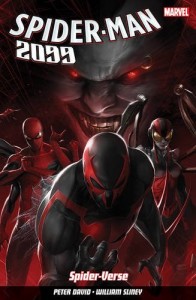 Spider-Man 2099: Spider-Verse – Peter David, William Sliney (Marvel / Panini)
It took a while, well a couple of decades if I’m honest, but thanks to Peter David’s run on the book, I can now safely say that, at long last, I’m a ‘Spider-Man 2099’ fan and that I’m now comfortable with Pete and Miguel sharing the Spidey limelight. Like every other arachnid powered super-being in the Multiverse, Miguel O’Hara found himself sucked into the ‘fight-or-die’ event known as ‘Spider-Verse’ that threatened the existence of every warrior of the web, everywhere. But sometimes, there’s so much going on in these huge crossover events that it’s difficult to keep tabs on who’s doing what to whom – unless it’s absolutely crucial to the plot – and as such heroes sometimes get overlooked in the big picture and their contribution to the eventual ass-whoopin’ that the friendly neighbourhood Spider-Men / Women gets overlooked. When I say they, you know that in this instance I’m talking about Miguel, right? You do? Good. Fear not though future wall-crawling fans, because the spotlight is focussed solely on Mr O’Hara and what he did on his big spider adventure in ‘Spider-Man 2099: Spider-Verse’

And you know what? Seems like old Miguel had an action packed, thrill filled time of it himself, as he and the Lady Spider, on a mission to rebuild a machine central to the big fight, found themselves back on her world, caught in her time and in a whole heap of eight legged, and tentacle, trouble. Just as there’s a version of Spider-Man on every world in the Multiverse, there are also versions of his enemies, and Miguel and Lady Spider find themselves battling a steam-punk version of the Sinister Six, which believe me kids is worth the price of admission alone. It’s a knock-down, drag-out, no holds barred braw that H.G. Wells and Jules Verne would have loved to have had ring-side seats for; and thanks to Will Sliney’s magnificent artwork, it looks even better than you imagine it would. But that’s not all, because just as he finally gets back to his time, Miguel finds himself in a future hell that bears no resemblance to the world he left behind and gets caught up in the machinations and scheming of the Maestro. Determined to find out what went wrong and prevent it happening, he “escapes” and travels back to present day New York, where despite his best intentions and determination to do the right thing, his actions have devastating, and nearly fatal consequences. All in all, it’s just another average day in the life of Spider-Man, one that’s made brighter, bigger and better by Peter David’s engaging, exciting, adrenaline fuelled story. Damn, I love this book… Tim Mass Movement