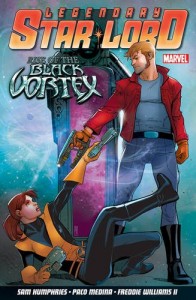 Legendary Star-Lord: Rise of the Black Vortex – Sam Humphries, Paco Medina & Freddie Williams II (Marvel / Panini)
While it may seem a little crass, insensitive and old fashioned given that we live in what is, hopefully, the dawning of the age of equality; it could be argued that until he meet Kitty Pryde, Peter Quill (aka Star-Lord) was nothing more than a directionless space pirate who relied on luck, charm and a modicum of ability to get him through each day. It was, as every fan of Han Solo and ‘Slippery’ Jim DiGriz knows all too well, a life well lived, but all things change, and in ‘Rise of the Black Vortex’ that’s exactly what happens to Peter. His life begins to change, as Kitty takes the reins and guides him through hails of gunfire, helps him evade galactic bounty hunters and escape the nefarious clutches of Mr Knife. And that’s before they save Spartax and the Universe from his power hungry father and the heroes and villains who have succumbed to the Black Vortex. After all, as Godfrey Winn once observed, “No man succeeds without a good woman behind him”, and according to my calculations, made I hasten to add while reading ‘Rise of the Black Vortex’, if it wasn’t for Kitty, Peter would be dead ten times over. Love, it would seem, really is a many splendored thing.

‘Rise of the Black Vortex’ is the story of how Peter and Kitty finally overcame their differences and beat the odds (and a whole host of intergalactic ne’er-do-wells) and became a couple, how she freed him from Mr Knife (who turned out to be his father, who knew? Well, uh, anyone who’s spent hours poring over Quill’s adventures. Just me? Nah, I knew it, you love this book just as much as I do), how they were plunged into a galactic crisis as the Black Vortex took hold of their friends and enemies and how they saved everyone and everything from destruction before getting their well-earned and thoroughly deserved happy ending. Oh, and in case you were wondering what happened to J’son of Spartax after he became part of The Collector’s, well, collection, then wonder no more, because the answer is included in these pages. Medina and Williams II (with a little help from Andrea Sorrentino and Paco Diaz Luque) artwork is literally breath-taking, and Sam Humphries story is ridiculously fast paced romp that’s exciting, heart-warming and hugely enjoyable, and okay, some of the dialogue is deliberately cheesy at times, but what do you expect? It’s a love story, and even the most cold hearted cynic wouldn’t be averse to cutting Peter and Kitty a little slack as they lose themselves in each other. You’ll laugh, you might even cry, you’ll gasp and sigh, but more than anything else you’ll love this book. You know why? Because despite the odds and despite the all the rules of comic stating that it should never happen, good things happen to good people. So make the most of it folks and tune in and enjoy the show… Tim Mass Movement