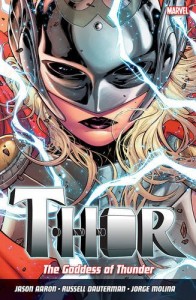 Thor: The Goddess of Thunder – Jason Aaron, Russell Dauterman & Jorge Molina (Panini / Marvel)
How many men can stand tall and say that they’ve taken down a God? I’m sitting here, trying to figure out it out and for the life of me, the only one that I can think of is Nick Fury. With a single sentence, he stopped Thor dead in his tracks. What it was he said to him, we’ll probably never know, but he did what no other mortal had managed to do. He made Thor question everything that he was; he made him feel, and by extension become, unworthy to wield Mjolnir and just like that, it was all over for Thor. Nick Fury may well have been crazier than the craziest person in the world’s craziest asylum when he did it, but he did it nonetheless. Thing is though, just because Thor is no longer worthy of the hammer, it doesn’t mean that someone isn’t, and ‘Thor: Goddess of Thunder’ is the story of the Odinson coming to terms with his new role, and place in the both this world and Asgard, and the passing of the torch, or hammer as the case may be, to his successor and how she (Yes, she. Got a problem with that? Because if you do, me and you, we’ll have a problem. You don’t? Good) gradually becomes acclimatised to, and learns to love, her new identity.

Thrown straight in at the deep end, she finds herself battling an ice giant invasion, as the Jotun’s in league with Malekith, seek to reclaim the skull of Laufey, the legendary king (and father of Loki) of Jotunheim, which has been found, and claimed by Roxxon and its psychopathic CEO, Dario Agger (who also happens to be a minotaur) who wants to claim the mystical and magical power of the skull for himself. With the Avengers and Asgard’s finest having been frozen by the invading hordes, it falls to the new Thor, with a little help from her predecessor to take the fight to the giants and send them packing. Which would probably be a lot easier if Asgard, Freyja and the Odinson weren’t locked in a family, and political, struggle with the recently returned All-Father, Odin and if all of the involved parties, bar Thor, weren’t desperately trying to uncover the identity of the Goddess of Thunder.

Combining pulse pounding action, intrigue, betrayal and mystery, Jason Aaron has once again proved that he’s more than capable of spinning a thoroughly entertaining and captivating yarn, which in places feels like the classic Thor tales of yesteryear as a mortal assumes the power of the gods and everything that goes with it, which thanks to the sure, steady and incredibly talented hands of Dauterman and Molina, scores a visual homerun. All hail Thor. Long may she reign… Tim Mass Movement