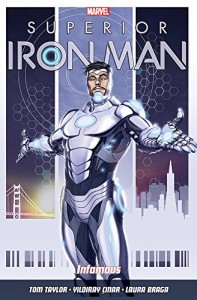 Superior Iron Man: Infamous – Tom Taylor, Yildiray Cinar & Laura Braga (Panini / Marvel)
Tony Stark has done a lot of terrible things in his life. He’s let his friends, his comrades and all those who care about him down more times than any of them, and I, care to remember, but even when he was hiding away in the bottom of a bottle, or riding high on his own sense of self-importance or consumed by his resolute belief that his opinion was the only one worth having any faith in, he’s always known where to draw the line. He’s always known the difference between right and wrong, and for the most part (‘Civil War’ anyone?) has always been firmly on the side of the angels. Until now. The Axis event changed Tony Stark. It changed everyone involved. Unlike everyone else who was involved whose personality reverted to its normal, and original, state at the end of the crisis, Tony (and Havok’s) didn’t. He became a vastly exaggerated version of his former self, a narcissistic, sociopathic ego-maniac motivated solely by pleasure and profit. He became the “Superior” Iron Man.

Beginning in the middle of the Axis event, Superior Iron Man finds Tony Stark living in San Francisco, holding the city in his thrall following the introduction of Extremis 3.0, an “app” which transforms people’s outward appearance; changing ordinary into beautiful at touch of a button. While the old Tony Stark would have been only too happy to have altruistically allowed the city to become beautiful forever, the new Tony Stark only sees an opportunity to make money, and after the free “introductory” period is over begins charging a scandalous daily fee for people to maintain the illusion of beauty. And like the worst drug epidemics, Extremis takes hold of San Francisco and its citizens in a heart-beat, and both are held to ransom by Iron Man. This being the world of Super-Heroes, it isn’t long before someone smells a rat and Daredevil makes it his mission to stop Stark and Extremis, and having discovered the truth, falls prey to the new Iron Man, but while Tony is playing dangerous games with Matt Murdoch and SHIELD (thanks to his acquisition and “protection” of a teen “super-villain”, which is a deliciously dark and involving sub-plot that serves as perfect illustration of just how twisted Tony Stark’s moral compass has become), Pepper Potts is getting ready to play her own hand, one that was dealt to her following an incident in Stark’s past and one that, given all of the clues dotted throughout the book, could very well prove the old maxim about payback and its relationship to female canines. And all of this happens in one book. In one book. It’s enough to make you head spin with joy and your brain go all giddy.

Treading similar territory to Superior Spider-Man (hence the title of the book), that is the moral corruption of much loved, if more than slightly fallible, hero, ‘Superior Iron Man recasts Tony Stark as the villain in his own story, but like all the best villains, he thinks he’s the hero, albeit one who knows that what he’s doing is wrong, but just doesn’t care that it is. Taylor and Cinar’s story is involving, lightning fast and doesn’t miss a beat, weaving multiple threads together to create a book that’s involving and immediate, pulling you straight into the story, which thanks to Laura Braga’s detailed and achingly exquisite art, leaves you wanting more. Much, much more… Tim Mass Movement