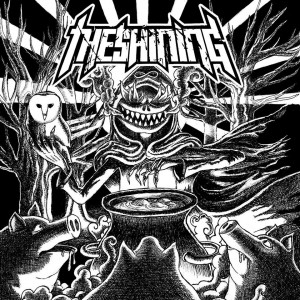 The Shining – Infinite Reign Of Madness LP (Pick Up, Inverted Inhumation, Darcytrash, Dead Heroes)
With ‘Rise Of The Degenerates’ The Shining were looking towards a more straight-up cross-over sound. Pointy, fast songs that were cool, but had rather mature heads and tails. It felt as if the skin of youth had been shed. Or was it maybe the state of the world back in 2012? War was dying out, the financial crises was about to end, and it seemed that global warming was on the back burner. When the dogs of war were once more unleashed in 2013/14, our fortress Europe felt the heat on its eastern and southern borders The Shining saw the need to unleash their own demons, and make their statements heard. With a thick layer of crusty hardcore, the thrash of ‘Rise Of The Degenerates’ gets an overhaul and slashes around like early Napalm Death having devoured equally ancient Suicidal Tendencies reinforced with touches of DRI and Nuclear Assault. It’s especially the tiny touches of old school grind and Roberts completely insane vocals, that make this slab of vinyl just that more lethal. What this Amsterdam gang of madmen have achieved is to make it sound good, and more importantly relevant. Madness is reigning surpreme and this album, with the great artwork, it a perfect example of how madness can also be used to create something good. Martijn Welzen