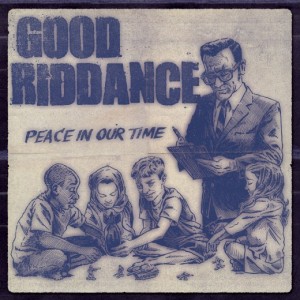 Good Riddance – Peace In Our Time LP/ CD (Fat Wreck)
Well after the school of tough hardcore brought us new albums from Sick Of It All, Madball Sheer Terror and Agnostic Front, pop-punk has taken up the challenge, with new albums from Lagwagon, Strung Out and now Good Riddance coming rapid-fire. Seems like 2014/15 has become retro-heaven for 90’s hardcore kids! Astonishingly, none of these new records has come across as a rehash or a weak modern version of the band’s glory days, but they all have the same spark that has ignited the scene for the past decades. With that in mind, a new Good Riddance record might not get the big fanfare that it otherwise might have done. But for the fans, this is exactly what they will have been waiting for and hoped for. Good Riddance keep the fires burning as they positively blaze through fourteen songs, the longest of which is barely over two and a half minutes. Everything you would expect is there, from with the band tight as hell and providing the ideal soundtrack for Russ Rankin’s heartfelt melodic voice. Sadly, some things never change and the lyrics reflect the sorry state of affair of our modern world where human and animal rights are still merely a footnote in the name of progress. As long as there is something left to protest against, bands like Good Riddance will always remain relevant and welcome. Tom Chapman