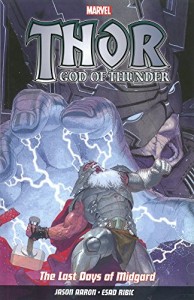 Thor God of Thunder: The Last Days of Midgard – Jason Aaron & Esad Ribic (Marvel / Panini)
When it’s time to finally draw the curtain on humanity, will we even notice its happening? Will we aimlessly wander over the horizon and plunge to our doom, oblivious of our own destruction, or will we fight every inch of the way, refusing to give in, desperately clutching to every second, stretching them into an endless number of eternities before the darkness engulfs us? Given that we’ve blindly handed stewardship of our fate to the political classes and their corporate puppet masters, I’m inclined to believe that the former is more likely; although part of me, the part that still believes in magic and all manner of fantastical myths, legends and stories, hopes that it’ll be the latter and that we’ll have to be dragged kicking and screaming toward oblivion. Part of me hopes that we’ll never give up, and that part, in the aftermath of reading ‘The Last Days of Midgard’, has suddenly become a lot bigger and a lot braver than it was before. You see, this is the book in which Thor faces enemies that he knows he can’t best and can’t beat, but he faces them anyway, and even in the face of defeat and, after an eternity of endless of vigilance, eventual victory, he still manages to cast his eye skyward and think of the future, knowing that while there’s hope, there’s always a chance for life to thrive.

Unfortunately, it isn’t thriving as ‘The Last Days of Midgard’ begins, as Thor faces two foes, in the present and the in far off future, unlike any others he has fought. In the here and now, he struggles to make sense of corporate policy as a billionaire industrialist and his company seem hell bent on stripping the planet bare an after Thor tries to halt said villain in his tracks, with a little help from some trolls and their legal department, the corporation sets out to destroy everything the God of Thunder holds dear and cares about. And in the far future, he defends a dead Earth from the clutches of Galactus, determined to make up for the mistakes of his past by defending his most beloved Midgard until the end of time, but even Gods have their limits and when faced by a being such as the World Eater, one powered by cosmic energy and force, those limits will be stretched to breaking and beyond. This time Thor faces the fights of his life, and they may very well be fight that even he, with all of his might and the power of the heavens themselves, can’t win.

Jason Aaron has pulled out all the stops in ‘The Last Days…’, throwing Thor against the ultimate Earthly evil, the kind of all-consuming corporation that each and every one of us feels powerless against, and upping their moustache twirling villainy (and adding a delicious twist to the CEO that just pushes it that little bit further, just enough and not too far) exponentially in order to create an almost unstoppable beast. It doesn’t matter how hard he hits it, or how much he damages it, it just keeps coming, keeps rolling onward, much like the relentless march of capitalism in the real world. It a stark reminder of where we are and a bold, satirical way to highlight and expose the ridiculous nature of the system that we’ve placed our unswerving faith in, a system that will eventually lead us, as a species, cap in hand, over the precipice that we’re currently dangling over. Then there’s Galactus, and futility of fighting him and trying to defend something that means nothing to anyone else, but it’s his belief, his hope and his faith that keep Thor fighting, and like Pandora before him, he knows, as does Jason Aaron, that while there’s hope, there’s every chance we can overcome whatever adversity humanity, or in this case Thor, ends up facing. It’s one hell of a ride, rammed full of black humour, an intricate and captivating plot that weaves it’s way in and out and around the lives of it’s incredible characters and the worlds, big and small, in which they dwell, that coupled with Ribic’s stunning art, make ‘The Last Days of Midgard’ essential reading for any, and all, fans of the super-powered, four colour universe. Our days may be numbered, but Thor’s adventure is just beginning… Tim Mass Movement