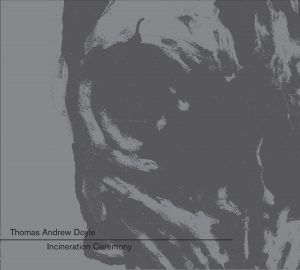 Thomas Andrew Doyle, or TAD as he’s more commonly known, as it turns out, isn’t just a beer swilling, Jack Daniels chugging, bone fide grunge superstar with an arsenal of riff powered anthems at his and his band’s, command. No sir, he’s also a complicated, intelligent musician and artist who has honed, crafted and created his own dark symphony that not only invites the listener into his thoughts, his soul and the very essence of his being, but also takes them on a journey into the unknown, hidden corners of their own minds and tasks them with confronting who they really are. Incineration Ceremony is a beautiful, stuttering piece of work, often bordering on genius, that’s as far removed from the turned up and tuned down amplification of Doyle’s daily job as it is musically possible to be.  It is more akin to the grand orchestral majesty of a hallucinogenic soundtrack to the history of individual evolution, if said history had been transformed into a cinematic odyssey by Franz Kafka. And it is remarkable… Tim Cundle