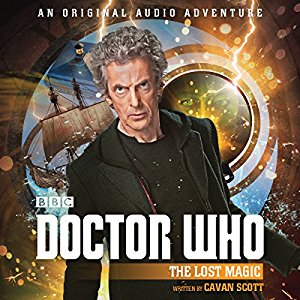 Continuing this short series of the Twelfth Doctor’s adventures by Cavan Scott is The Lost Magic, the third chapter of a four part arc. I’ve always enjoyed Doctor Who episodes that include figures from history and this episode sees the Doctor hanging out with not one, but two of them in the form of Sir Francis Drake or El Draque, as the Spanish called him, and magician, philosopher and mathematician John Dee.

Labeled a mad man for most of his time on Earth, John Dee’s life changes suddenly one day, when the face he sees in the mirror is not his own. Given powerful secrets including control of the elements, it‘s only a matter of time (isn’t it always) before somebody tracks down Dee, steals said secrets and wreaks havoc on the world. Meanwhile the TARDIS has landed on a Spanish Galleon, heading for England, which is caught up in an unnatural storm. Now shipwrecked and lost Alex and Brandon must find out what is causing this unholy supernatural storm while the Doctor is left to ponder the connection between Drake and Dee.

The new team of Alex and Brandon will, again, polarize people. Are they worthy companions for the Doctor? The continuity of the series is dealt with as well, but you don’t have to be familiar with the previous episodes to understand this one. Read by Dan Starkey, who plays our favourite Sontaran- Strax, this is again, another enjoyable Twelfth Doctor romp. It offers little to the legend of the Doctor but what it does offer is just over an hour’s worth of damn good storytelling… Chris Andrews