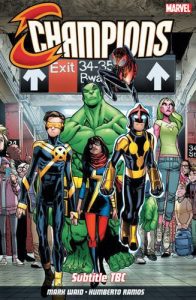 The fallout from Civil War II continues as the next generation of Avengers, dismayed, heart-broken and dejected by the actions of those heroes that they once looked up to, during and after the conflict, decide that enough is enough and elect to leave the politics and in-fighting of the “grown up” superhero community behind in order to strike out on their own. Finally realizing that the Avengers are never going to be what she always thought they were, Ms. Marvel follows Nova’s and Spider-Man’s leads and quits; then promptly recruits her former team mates in order to try and create the sort of super-powered team she – and they – always wanted to be a part of. One that fights for the little guy and always does the right thing, no matter what; and after picking up a few more members, some of whom are immediately welcomed into the fold and some not so much, the Champions take the world by storm in less time than it takes certain politicians to tweet about how misunderstood they are. The only problem is though, they don’t actually know how to work with each other; and in Change the World they’re thrown in at the deep end as, in between bonding exercises they end up breaking up a slavery ring, battling Islamic fundamentalists, rescuing trapped miners, escaping from a disgruntled faction of Atlanteans, combatting the very real spread of ill-informed, vile racism and bigotry and hate in small town America and somewhere among all that, learn to deal with the very real and omnipresent threat of their latest member, Gwenpool.

You know those, unfortunately, all too-rare books that just make you grin from ear to ear while you’re reading them? Those books that you don’t want to put down even for an instant because you’re enjoying them too much? Books that you actually slow down your natural rhythm and pace with because you don’t ever want them to end? Yeah, Change the World is one of those books. Ramos has crafted and created an unending ocean of gorgeous artwork to accompany Mark Waid’s vibrant, fast flowing story in which complex and vivid characterisation and punchy natural dialogue take equal billing to the tumultuous teenage relationships and dynamics that lie at the heart of the team and the ever so slightly terrific plot. I think Champions might just be my new favourite book; or at least my pick for the top spot of the year so far. No, I don’t think it is. I’m sure it is.  Yeah, it really is that good… Tim Cundle