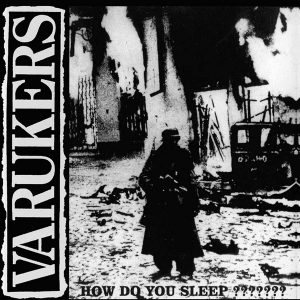 Hand on heart, I don’t know an awful lot about The Varukers. I know that their frontman Rat sang for Discharge for years (and also sings for Warwound) and that Marvin from Chaos UK who also used to run Autonomy Records in Cardiff played bass for them at one point, but before I spent a couple of hours, in between cups of coffee and before my knees gave out, bouncing around my lounge to the D-Beat onslaught of How Do You Sleep? I didn’t really know anything else about them.  A re-issue from the turn of the century (that’s 2000 to you and me), How Do You Sleep? is The Varukers fifth album and it’s a solid dose of speed happy, socially and politically aware punk rock in the finest early eighties Discharge tradition. It roars, rages and rallies against all of societies evils in a blur of heart felt punk fury and reminds you just how good well played, well executed protest punk was, is and can be.  Forget the glue, get the coffee on and get ready to start slamming… Tim Cundle