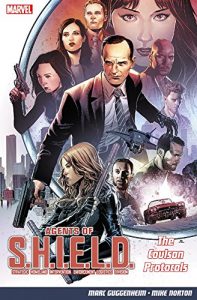 Linear progression and cause and effect – while being firmly adhered to the real world – have always had little, if any, bearing in the four colour universe.  It’s a realm where anything, and everything, can and does happen and its existence is limited only by the imagination of its creators and readers.  During the last decade or so, we’ve become used to seeing our heroes evolve from the page to the small and big screen, so much so in fact that it’s almost become an accepted norm, the reverse of that process though, where heroes are taken from the screen and transplanted into comics is far less common. In fact, it’s so uncommon, that Agents of S.H.I.E.L.D. is just about the only current title following that particular path. Not that it’s a bad thing, as it’s a pretty accurate adaptation of the show and manages to slot the characters into the print mythology of the Marvel Universe seamlessly and in almost effortless (although I imagine it was quite a tough job to do so and Marc Guggenhiem deserves a round of applause for making it appear so easy) fashion.  And what’s even better is the fact that The Coulson Protocols is an engaging and captivating tale that wraps it’s tendrils around you and pulls you into the rapidly unfolding action and drama and before you know it, you’re rooting for Phil and his team as they fight the fight good fight against HYDRA while being at odds with their own government’s other “clandestine” law enforcement agencies.

The Coulson Protocols is basically a good old fashioned spy story on steroids, filled with twists and turns, betrayal, treachery and deception. Coulson and company race to track down a file that details how to terminate every hero in the world, a file stolen by an old adversary disguised as Iron Man.  Even worse, the file was created, unwittingly of course, by Coulson whose ideas formed the basis of its creation, ideas which were surreptitiously taken from him by his ex-girlfriend Lola. Who may or may not be working for a rival agency and who may or may not have broken Phil’s heart, which may or may not lead him into a tailspin as his professional and personal live collide while he’s trying to save the lives of all of the superheroes on the planet. I know, it sounds kind of complicated, but trust me it isn’t and thanks to Marc Guggenheim’s rock solid plotting makes perfect sense (and if you’ve already read Avengers Standoff, it’ll make even more sense) when you read the book.  Which I sincerely hope you will, as artist German Peralta serves up deliciously detailed page after page, while the aforementioned writer does a mighty fine job of ensuring the characters remain faithful to the televisual progenitors while adding a few creative elements of his own, so if you don’t read it, you’ll be missing out. Or as my old Gran used to say, “You’ll be cutting your nose off to spite your face” and you don’t want to do that do you? It’d be painful, there’d be lots of blood and mess and you’d be sort of funny looking afterwards. So do yourself a favour, keep your nose, stay pretty and read The Coulson Protocols. Fast, furious and fun, it’s a perfect introductory title for new fans of the Marvel Universe, those folks who have stumbled across thanks to the TV shows and the films, as it serves as a bridge between the mediums of comics and television and it’s faithful enough to the history and established canon of the Marvel Universe to make even the most staunch of long-time comic devotees happy.  It’s the best of both worlds…  Tim Cundle