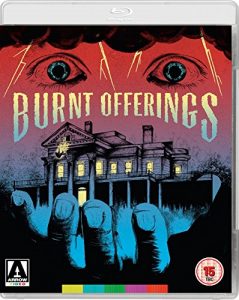 Burnt Offerings is one of those films whose images never quite leave your head. Despite having seen it only twice – a third time counting this review – since its release in 1976, its most haunting scenes do just that: haunt. Ben’s struggle to save his son; the thumping of the coffin on the stairs; and, of course, Marion’s final revelation as … well, if you’ve never seen it, how can I say? Yet despite these moments, as a whole it somehow fails as a film worth remembering, surprising considering the co-writing talents of Dan Curtis (Dark Shadows, Kolchak The Night Stalker) and William F Nolan (Logan’s Run). Nothing is ever fully explained – or, indeed, explained at all – and there are some surprisingly clumsy incidents of volte-face such as Marian’s sudden willingness near the climax of the film to save her son and leave the Allardyce Estate. But, strangely, it stays with you – something, perhaps, to do with an admirably restrained performance from Oliver Reed as Ben, and a quite remarkable mental and physical disintegration from Bette Davis as Aunt Elizabeth, who seems to have relished the role and the company of her co-star (watch for and listen to her reaction to the slap on the bum). Forty years on, this reverse precursor to The Shining feels less like a film and more like a TV Movie, but is here presented in a brightly restored version with extras including interviews with Anthony James (the chauffeur), Lee Montgomery (David, the son) and William F Nolan himself. Burnt Offerings might fail as a film wholly worthy of remembrance but is certainly a film worth watching once, if only for what it leaves behind.  Mike Wild