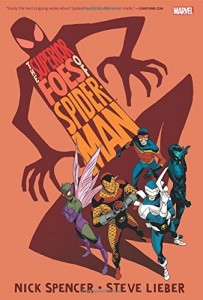 Let’s face it, there are few superheroes as famous as Spider-Man and in his long and illustrious career defending New York, and the world, from the machinations and Machiavellian schemes of it’s would be conquerors and subjugators, he’s made a lot of enemies.  And The Superior Foes of Spider-Man is their story. Well, it’s the story of five of them anyway, the ones now utilising, and operating under the group alias ‘The Sinister Six’. Yes, I know that there’s five of them and that five isn’t the same as, and is one less then, six, but like Speed Demon is so fond of saying to his comrades in crime, it’s better to split the money five ways than six, and let’s face it he’s got a point. Who can argue with his “faultless” logic? So, yes, this is the story of the new Sinister Six and their exploits, which bring them into “contact” with a veritable who’s who of Spidey’s acquaintances in their bid to make a “name” for themselves and land that one big score.

Told almost entirely from Boomerang’s perspective, The Superior Foes is one of those books that once you picked it up and started reading it, nothing and no-one will be able to make you put it down. Your ma needs to be rushed to hospital? Ah, she can wait for the ambulance, it’ll arrive in a couple of hours and you’re only a third of the way through the story. The four minute warning just sounded? That means there’s time to read another couple of pages, so pass the ear-plugs and carry on. Who’s Boomerang? Oh come on, you remember him, slick seventies style suit, covered in boomerangs, the same ones that he throws at people because, well because he’s Australian. Yeah, I know. He knows it too and he isn’t afraid to share his rather colourful views on the subject with anyone, and everyone (although mostly just his captive audience, which would be us) who’ll listen. Nick Spencer’s tale of the criminal underdogs who just can’t catch a break will strike a chord with every poor schlub and schmuck, yours truly included, who just can’t seem to reach that ever elusive carrot that life continually dangles in front of us. It’s a laugh out loud funny, and more often than not hilarious, tale of the “hardships” faced by supervillains as they do what they do “best”. That is lie, cheat, steal and take candy from babies (well, puppies from little girls) as they try to make a living by being badder than everybody else.  As for the story, well, it’s a convoluted, complicated web of intricate cons and robberies and just when you think you’ve got a grip on what’s really going on, Boomerang flips another switch and you’re back to square one. Full of the kind of marvellous treachery, double-dealing, betrayal and action that you’d expect from a bunch of second rate thugs who sell their own grandmothers if they thought that there was a profit in it, The Superior Foes of Spider-Man is the book that should be at the head of everyone’s pull list, because who doesn’t love a good underdog story? Exactly, and this isn’t just a good underdog story, it’s a great underdog story. In fact, it might just be one of the four colour world’s greatest underdog stories. Might being, of course, the operative word, because there’s no accounting for taste and just because I loved it, it doesn’t mean you will. You should, but you might not. There it is again. That pesky operative word. Might.

Like a magnificent super-powered, costumed criminal version of a head on collision between Take The Money And Run, Ocean’s Eleven (the Clooney and Pitt remake, not the Rat Pack original)  and The Sting, Nick Spencer’s Superior Foes doesn’t put a foot wrong or miss a beat from beginning to end. The dialogue fizzes and crackles with energy, the characterisation doesn’t try to glamorise the players but makes sure, as vile and awful as they are, that you end up rooting for them, the artwork is gorgeous and has the same sort of feel and tone as the EC comics of the fifties and the plot keeps you guessing, and on your toes, until the final page.  This isn’t just a book; it’s a lowlife-filled, wise-cracking, electrifying adventure.  It’s time to get sinister… Tim Mass Movement