Warning: preg_match() expects parameter 2 to be string, object given in /var/www/vip4/sites/vip6102689/httpd/htdocs/wp-includes/formatting.php on line 4866
 Torchwood: More Than This - Mass Movement
x
Spread the love 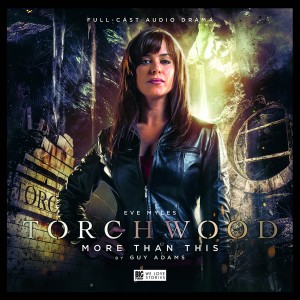 Frank Hennessy once sang “I’m Cardiff born, I’m Cardiff bred and when I die, I’ll be Cardiff dead”, a song that could have been written for, and about, Roger Pugh, the council planning official who Gwen Cooper locks horns with in More Than This. Seeking planning permission to rebuild the hub, she finds herself caught in the increasingly complicated world of local government bureaucracy with her only source of information, and contact, being the previously mentioned Mr. Pugh. Given a time-frame that she deems inappropriate and with Pugh’s refusal to expedite her application, Gwen decides that the only way she’s going to be able to speed up proceedings is by showing Roger Pugh, up close and personal, what Torchwood is and what Torchwood does.  It’s a “works day out” that Roger Pugh will never forget as he’s put through the wringer and pushed beyond, his admittedly rather safe, limits. Which would normally have been business as usual for Gwen and Torchwood, but Roger Pugh’s guide to the Cardiff he never imagined is also the day that the rift decides that it’s time to-re-open. And the only people standing between the end of the world and the continued existence of the human race are Gwen Cooper and a council planning official.  So, it really is business as usual then.

More Than This is a funny, tragic, heart-breaking tale of a man suddenly being exposed to a world he never knew existed, and a woman coming face to face with the inescapable reality of one that Torchwood has no bearing on. It would have been so easy to create Roger Pugh from clay, to make him a two dimensional, stereotypical functionary, but rather than tread that well-worn path, Guy Adams has constructed a complicated, believable character whose frustrations and mournful situation have trapped him in limbo and left him unable to move on, and forward with his life. Richard Nichol’s portrayal of the most Cardiffian (is that even a word? I don’t know, but it sounds like it should be) of men lends him an authenticity that gives the listener pause and a moment to thank whatever deity or higher power they have faith in that they don’t have to share his daily fate, one beset by nearly unimaginable emotional pain. He’s an odd foil for Gwen Cooper, brought back into extra-terrestrial slaying, Earth saving action by the ever excellent Eve Myles, but their “partnership” works, and hopefully it won’t be the last we see of him. After all, the Hub is short of an employee or two and stranger things happen in Cardiff all the time. Just ask Gwen. She’ll tell you all about it. Torchwood Three, it’s good to have you back… Tim Mass Movement