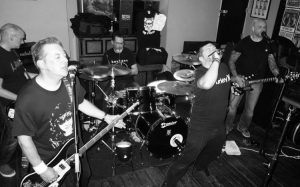 The Setbacks have been plying their punk rock trade for 17 years. Bassist Lee Cotterell kingly stopped by to have a chat about the band’s history and more. Pogo, pogo!

MM: Hey, Lee. The Setbacks are something of a West Country punk rock institution. Care to share a scattered history for those not in the know?

LC: The Setbacks formed in Bath from the ashes of ska-punks Mighty Joe Young and skate-punks Tweaker around autumn 2001; playing our first gig in July 2002 with the intention of playing no-friils punk with a hint of metal. Give or take the odd line-up adjustment, we have since played with the Misfits, UK Subs, TSOL, Lagwagon, D.O.A, Subhumans, Vice Squad, TV Smith, Richie Ramone, The Avengers, The Vibrators, Horrorpops, Goldblade, 999, Sham 69, Splodgenessabounds, Drongos for Europe, The Restarts, Texas Terri, Citizen Fish, No Choice, and dragSTER, to name (drop) but a few.

MM: Speaking of line-up changes, who’s in the current fold?

MM: And speaking of the Misfits, you were on the bill with them here in Wales at the much missed TJ’s in Newport. What’s your lasting memory of that place, and the Cheap Sweaty Fun shows in particular?

LC: I have fond memories of TJ’s and Cheap Sweaty Fun. That Misfits gig was quite early on in our “career” and I think we just about pulled it off. Simon [Phillips] was a visionary as far as punk promoters go and we’ve not seen his like since and TJs was nearest thing we had to CBGBs this side of the pond. Glad to have been a part of it.

MM: Venues are under threat more:  than ever. Which ones should we be going to in your part of the world?

LC: Bristol’s still got some great venues, some of which are under threat, like The Fleece, Thekla, Louisiana, the Trap and the Exchange. Further afield there’s the Royal Oak in Bath and the Three Horseshoes in Bradford on Avon – both cracking little venues with landlords who have a genuine love of live music. If I can just return to your side of the bridge for a sec though, I must give a shout out to the Dolls House in Abertillery. Love playing there.

MM: I know you’re a vinyl addict. What were your last five purchases?

LC: The Godfathers – Hit by Hit and More Songs About Love And Hate, Magazine – Real Life, Idles – Joy As An Act Of Resistance, Teleman – Family of Aliens… a present for my other half, she’s a big fan if theirs.

MM: You’ve mentioned Idles, there. Of the current underground breed, what bands are you championing?

LC: Bands that have impressed me of late are Blue Carpet Band, Army of Skanks, Aerial Salad, Tenplusone, The Liarbilitys, Yur Mum, Face Up, Kiss Me Killer and Kearney’s Jig.

MM: Are there plans for some new recordings from The Setbacks? We must be due some new music soon!

LC: There are. Since Pete joined us on drums we’ve written a lot of new stuff so we’d really like to do an album at some point next year.

MM: And where can we catch The Setbacks’ live experience over the final months of 2018?

MM: I think I’m right in saying you play a Rickenbacker live. Are you a guitar nerd with it comes to equipment?

LC: Not really. I bought a Rickenbacker 4001 back in ’85 partly because I’m a massive fan of The Jam and partly because it was a bargain. It does turn heads though and it’s a great conversation piece. There is this kind of cult with Ricky players though a bit like the way people who drive old Volkswagen Beetles always acknowledge each other.

MM: Apart from The Jam, who are your biggest influences, inside or outside of music?

MM: Thanks for chatting to Mass Movement, Lee. The stage is all yours. What’s your parting shot?

LC: If you want to play in a band just get out there and do it. Don’t let people tell you can’t because you’re too old/young or your face don’t fit. Oh, and be nice to each other, ’cause there are already too many arseholes in this world.

Keep up to date with The Setbacks here