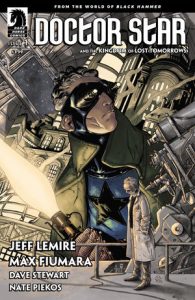 Anyone familiar with Black Hammer will instantly connect with the latest of its offshoots- Doctor Star. Its creator Jeff Lemire has seen fit to bring us the superhero’s back story in this promising new series. The story starts with the now aged Doctor, speaking to the stars in his dusty old observatory, where we realize that he wants nothing more than to reconnect with his estranged son, whom he hoped would one day carry on his work. We are then thrust back to America in 1941, where he was just plain old Jim Robinson, just before the American’s decided to join the war.

His work in para-radiation and the parazone has been noticed by the Department Of Defence and they want to fund Robinson to build them a weapon, for when they inevitably join the war. But it at all comes at a high cost for Robinson who’s life would be changed forever when he “reaches the stars”  From then on the book flicks back and forth between the present and various points in his life, where we find out, just how much a profound effect his work had on his and his family’s life.

What we have here is essentially an origin story and an intriguing one at that. It gets to the point quickly enough when addressing the past, whilst at the same time sets up a number juicy future storylines. The action comes thick and fast as we get to see The Liberty Squadron do their thing for the war effort, but be wary because in reading this book you will be taken on an emotional rollercoaster ride. At various points in the book you may find yourself both loving, hating and even sympathizing with the Doctor and that’s where you realize the beauty of Lemire’s writing. The Kingdom of Lost Tomorrows is steeped in emotion as we are taken through Star’s life and his various choices and the artwork by Max Fiumara perfectly captures those aspects of the book making the whole package an absolute joy to read. Chris Andrews