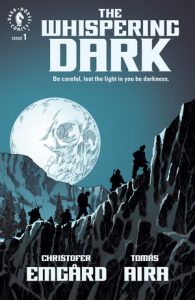 Hooking us straight in with a good old fashioned “stranded behind enemy lines” storyline, The Whispering Dark hints at plenty more than just that before you make it to the last page of the first issue.

U.S. helicopter pilot Hannah Vance is called to assist a squadron trapped deep in the depths of the Russian forest. When her chopper is shot down from the sky, and her Captain is killed, she finds herself stuck there with a Special Forces team pumped full of “go pills”, hungry, tired, fractured and dejected, hell-bent on finding their way home.

Arguing amongst themselves, they come to realise that Hannah is in fact the highest ranking officer, and it’s up to her to get them through the Russian mountains which, given that all their comms are down, would likely end in regular commando-action Russian enemy tears, even if we didn’t know it was going to end in monstrous supernatural ones.

Written by Christofer Emgard (Mirror’s Edge: Exordium), Hannah’s first person narrative alludes to a woman of faith, with a Reverend father at odds with her decision to join the army in the first place, and one who doesn’t seem much like this is where she hoped to end up.

The gritty art from Tomas Aira (War Stories, Night of the Living Dead: Aftermath) captures the isolation of the wasteland, the smouldering anger of the increasingly doomed soldiers, and hints at the maelstrom to come with shades of madness leaking out in the later panels.

There’s nothing better than a military/monster crossover, and even though we’re not treated to any creatures in issue #1, something tells me this is going to be a good one. Sophie Francois