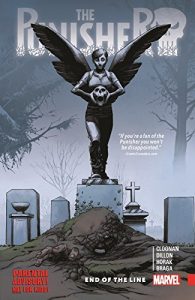 The last round has been chambered and the end is near as Frank makes everyone face the final curtain… That’s right boys and girls, the Punisher is back to finish what he started in On the Road and bring down the drug pushing mercenary group Condor once and for all. As hard as they tried to kill him last time, in End of the Line, Condor (which includes some former wartime associates of Frank’s) ups the ante as the Punisher chases them and the F.B.I. pursues him. In the midst of all of the blood soaked, viscera covered brutal action in End of the Line, the truth about the devastating effects that long term or over-exposure to EMC (the drug that Condor are pedalling that turns normal men into psychotic super-soldiers) is gradually revealed and Frank rediscovers through a chance encounter deep in the forest with an angel of mercy, the unshakeable bond that exists between old and bold and former and current soldiers.  And as the corpses mount up, the minute hand ticks ever close to dead o’clock and in an orgy of drug-fuelled mayhem and carnage, everybody on the Condor gravy train gets exactly what they deserve* courtesy of Mr Frank Castle.

End of the Line isn’t rocket science, it isn’t unnecessarily complicated, doesn’t tug at your heart strings or offer any sage advice about the state of the human condition.  And it doesn’t need too. Why? Because this is a Punisher story and it revels and delights in being exactly what it is. An eighties style revenge thriller writ large in four colour glory in which the “hero” of the hour kills everyone on the wrong side of the law and teaches the F.B.I. agent determined to bring him in, who even in her darkest moments refuses to sink to her adversaries level, the difference between justice and punishment. Becky Cloonan knows that Castle is a simple creature, a killing machine forged in war and driven by the need for vengeance, and plays to the character’s strengths by fleshing him out ever so slightly and crafting exactly the right kind of no-nonsense, straight forward pandemonium filled story that he needs in order to flourish. The dialogue is crisp, direct and (thankfully) cliché free, as is the characterisation, and between them, Matt Horak and Laura Braga pick up the baton left by the much missed Steve Dillon and in tribute to their departed colleague infuse the artwork with his spirit and let Dillon’s definitive Punisher live again in the pages of End of the Line. Frank’s the best at what he does and while what he does isn’t very nice, it is incredible enjoyable…  Tim Cundle

*And what they deserve is punishment. Frank Castle style.