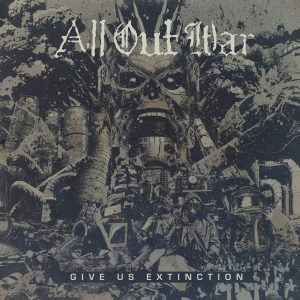 Part Cro-Mags, part Kreator and part Slayer, All Out War are back with a devastating new album in Give Us Extinction.  Their first two albums Truth in the Age of Lies and For Those Who Were Crucified are bonafide classics and are still the benchmark for the genre. Make no mistake this album is ready to join those ranks. Recent albums, although still very good, have not quite hit the mark. They were leaning a bit too much towards the metal side of things. This album readdresses this balance quite nicely. Simple but ferocious riffing backed with venomous vocals courtesy of Mike Score which sound more focused and angrier than ever. Like always they make good use of samples, which gives an extra edge to some of the tracks. There are some female vocals peppered about the album which bring to mind NYHC legends Nausea, which is handy because that’s exactly who they cover on Track 11, with Cyber God.

Having broken away from Victory Records again, All Out War seem to have rediscovered their mojo. Hard hitting and powerful stuff, just like metalcore should be…Chris Andrews