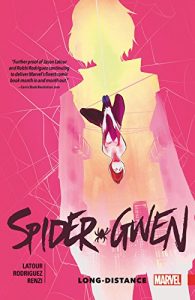 It’s holiday time for Gwen Stacy and in Long Distance she’s spending what’s traditionally one of the happiest weekends of the year for millions of alternate reality Americans with her family from another world, that is Jessica Drew and her baby and the former would be super-villain turned nanny, Roger . While it’s far from an ideal way to celebrate, it’s all she’s got, what with her father being in prison and her relationship with the Parkers being somewhat strained, and she’s determined to make the most of it. Talking of May and Ben, Gwen at least manages to make peace and begin the long journey to some sort of normality with the former, and manages to at least spend some time with her father, so all things considered it could be worse.  However, almost as soon as the holidays are over, her downward spiral picks up momentum again, as she finds herself, thanks to the deal she made with Matt Murdoch, in all kinds of fresh hell with S.I.L.K. , the Hand and the Kingpin. So, yes things could be worse, but they could also certainly be a lot better and if her Spider luck doesn’t improve soon, she’s going to hit the bottom of the superhero bottle and just carry on falling. However, it’s not all doom and gloom for Spider-Gwen as even though her ‘professional’ life is travelling to the Devils’ domain in a gradually accelerating hand cart, her personal life is the usual bustle of teenage activity and drama squeezed in between her hero duties. All of which is all-too briefly captured in Spider-Gwen Annual #1 (which features the run in that Gwen’s Earth’s Captain America has with a strangely orange M.O.D.A.A.K and her band’s confrontation with the Watcher) and Tom Taylor’s All-New Wolverine #1.  Honestly, Long Distance is like your birthday has come early and you’ve actually been given a present that you want.

Whatever Kool Aid Jason Latour is drinking is going to become my beverage of choice, because it’s made his creative juices and imagination flow at an exponential rate in Spider-Gwen. Touching, immediate, funny, personal and full of superheroic bluster and conflict, it captures all of the stress, anxiety and fear of being a teenager on the cusp of adulthood and multiplies it by the Spider factor which transforms Gwen’s life into a high wire act that’s performed on roller skates while simultaneously juggling knives that are on fire.  While her life is isn’t exactly a bed of roses, as she’s constantly moving from confusion to chaos and back and forth between the two, it’s wildly entertaining and engrossing for you, me and every other reader, and partnered with Latour’s magnificent prose, dialogue and plot,  Rodriguez and Vision’s detailed, dramatic art that blows up and magnifies every crisis and emotional blip that Gwen endures, makes sure that Long Distance is one rollercoaster ride that you won’t want to miss. Come of folks, sing-a-long , “Spider-Gwen, Spider-Gwen, better at doing whatever a Spider-Man can…” … Tim Cundle