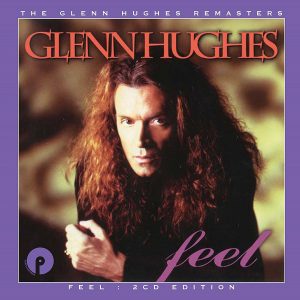 With his fourth solo album Feel, originally released in 1995, Glenn veered significantly in what could be described as his most extreme extension and involvement in pop, soul funk. Brimming with commercial flare and liveliness, Feel shows Hughes reaching out to contend with the likes of Elton John and George Michael. As he pushes to create a hugely accessible sound that would lead to big album sales, Feel is most definitely not a rock record. It is a great record in its own right, but different; do not expect any of the previously delivered harder rocking tunes. As a bonus, an incredibly vigorous re-recording of the Deep Purple track Holy Man (originally featured on the Stormbringer LP) brings things nicely to a close. Disc two offers fifteen tracks that will be of great interest for any of his, or Deep Purple fans. An in-depth interview from a Dutch radio station in 1994, exclusive acoustic versions of From Now On and Lay My Body Down, and a couple of storming Purple tracks sitting comfortably amongst the seven song live set from Schuttdorf Open Air ’94 will grab the attention of any rocker. Complete the package with a glossy sixteen-page booklet and Feel has most certainly been given a classy expansion. Mark Freebase