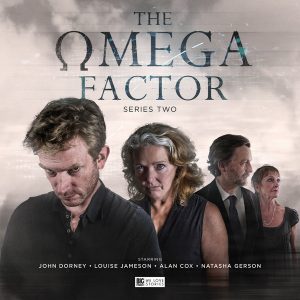 While the nineteen seventies may have been dull and dreary as far as everyday life was concerned, it was a decade that excelled in music, film, literature and television.  The seventies gave the world punk rock, heavy metal, Star Wars, The Six Million Dollar Man, 2000AD, saw Doctor Who reach dizzying heights of popularity (thanks to Jon Pertwee and Tom Baker) that it’s never been able to match since and witnessed the birth of The Omega Factor. Steeped in conspiracy, mysticism, science and the occult, The Omega Factor was a disturbing, wonderful series that explored the baffling, and often frightening, ideas of telekinesis, telepathy, ESP and “magic” and wrapped all of its component parts together in an intelligent, gritty drama that once seen, was never forgotten. However, somebody did manage to forget it; that someone being the BBC, and after one season it disappeared from screens and was seemingly destined to fade into obscurity as a well thought of and received curio, a victim of its brilliance, damned for being too far ahead of its time.  Then, nearly four decades after it disappeared, something remarkable happened. Big Finish brought The Omega Factor back from the land of the dead, at first as an audiobook of the original series novelisation and then as a full blown series.  And that first series was good. It was very, very good. But  between then and now, something happened.  Probably involving the writers and some sort of secret government cerebral steroids or a machine designed to boost cognitive perception and imagination or some other such hushed up and hidden thing, because this second outing, is even better than the previous one, and given how good that was, it doesn’t take a genius, evil or otherwise, to work out that The Omega Factor Series Two isn’t just good, it is – as a big orange tiger from the same decade was so fond of saying – great.

Evolving over the course of four, at first apparently different, stories Somnum Sempiterum, The Changeling, Let the Angel Tell Thee and Awakening, this season charts the rise of Department 7 from relative obscurity to a fully funded programme in which Whitehall has a significant interest. Immersing its two leads Adam Dean (John Dorney) and Anne Reynolds (Louise Jameson) in impossible murders, strange prisoners and voices from beyond, they soon became hopelessly caught up and entwined in the generational secrets of the rich and powerful as cutting edge science and ancient magic collide headlong when a long “dead” enemy and his followers return to renew their quest for ultimate power. And as their grip tightens and the net around Adam and Anne slowly draws closed, both are left having to fight for not only their lives, but those of their nearest and dearest as well.

How do you, with its sophomore series, better what was, arguably, one of the best new dramas of the last five years? Why, by upping the ante, having the writers feverishly create a new arc that not only harks back to The Omega Factor’s orgins, but also sits more than comfortably in an era where most of its initial premise has been debunked and rejected in favour of the study of artificial intelligence. Built on a bedrock of solid old fashioned story-telling that’s imbued with a sense of wonder and questions the plethora of weird ideas and theorem that it exists around, The Omega Factor Series Two is also gifted by a brace of absolutely magnificent performances from John Dorney, Louise Jameson, Alan Cox, Natasha Gerson, Alan Francis and Alex Tregear that lift it beyond the realm of jaw dropping into a whole new dimension of excellence.  Shakespeare was right. There are more things in Heaven and Earth than we can dream of in our rational philosophies. More surprising, fascinating and startling things. And The Omega Factor is one of them… Tim Cundle