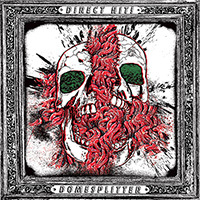 Originally released as an album in 2011 on Kind Of Like records, the songs were released before that as part of a series of free-download EPs, so this release, in the words of band frontman Nick Woods “Wasn’t even ‘original’ when it first came out, which makes it pretty fucking derivative now”. Despite the self-derision, this collection of infectious catchy punk tunes is more than deserving of a second/ third lease of life as a shiny big slab of vinyl. Listening to this, I can hear a lot of checked shirts bouncing around in a sweaty basement, beer flying everywhere and a bunch of folk having the time of their lives. The frequent use of gang vocals gives a sense that we’re all in this together – you, me and Direct Hit!, and whatever shit is happening out there, this is our time and place to live a little. Musically this sits right alongside one time or another label mates such as Against Me, Dillinger Four or Flatliners – good time bands that have their heads screwed on straight but also know how to write a damn good tune. As indeed does Direct Hit! Tom Chapman