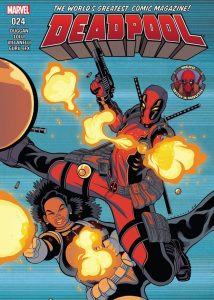 Poor old Wade. Even when he’s doing the right thing, nothing ever really goes according to plan and somebody always ends up getting hurt. Which if you’re Wade, is okay because of the whole healing factor thing; but it isn’t Deadpool that usually ends up knocking on death’s door when trouble comes calling, it’s the folks around him, the ones he cares about who almost always end up paying Wade’s bill with the piper. Patience Zero though throws you a bone of hope, as it opens with a touching and heartfelt one shot in which Wade does the hero thing and in his own inimitable way, and ends up saving someone from the precipice of eternity.  It’s an endearing, emotive tale, one that’s beautifully written and illustrated and is imbued with just the right amount of sentiment without ever becoming too sickly sweet or syrupy. And lots of violence. Lots and lots of violence.

Then it’s on to the main course, the arc that carries the book which finds Wade and Preston teaming up to stop a recently returned, in tried and trusted body horror Voldemort meets Kuato* fashion, Madcap who is intent of gaining his pound of flesh from, and more than a modicum of revenge on, Deadpool. It’s a frantic, adrenaline pumping, find the bad guy at all costs story in which lives hang in the balance and a deal with a proverbial time travelling devil designed to save the day, one that will almost certainly come back to bite the hero of the hour where the sun doesn’t shine, takes centre stage. Oh and that ending, that final moment that Wade realises that in order the balance the scales he’s going to have to do lots of very bad things and that he’s probably going to have to do them to good people. Lady Luck and Fate still, it would seem, aren’t exactly fans of, or enamoured by, Wade Wilson.

Gerry Duggan has once again lined up every target and using his party trick, has turned winked at his audience, pulled the trigger and hit every single bullseye. Twice.  Which sounds impossible, but it isn’t because this is Duggan and this is Deadpool and that means anything is impossible. Especially when the characterisation, dialogue, plot and all and sundry bits and bobs and blood and guts that hold it all together are as sharp, tight, focussed and on point as they are in Patience Zero. Oh and don’t even get me started on the droolicous, eye dazzling, brain popping artwork, courtesy of Lolli, Villanelli and Koblish, that propels Deadpool and company to their date with destiny. Because I could talk about its exquisite detail all day and every day. Oh yes I could. I really could.  But don’t take my word for it, check it out for yourself. Wade is waiting. And he isn’t a patient man… Tim Cundle