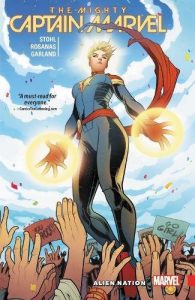 Civil War II didn’t just rip the Marvel Universe apart; it also tore fandom straight down the middle as well. You were either with Tony or you were with Carol, and who you sided with shaped your attitude toward Iron Man and Captain Marvel from that point on. Me? For once, I was with Stark all the way and the autocratic stance adopted by Carol “Captain Marvel” Danvers throughout the conflict and the tragic way it ended, sealed her fate as far as I was concerned. She became persona non grata, a figure whose presence I would simply acknowledge, but beyond that, I wanted nothing to do with Captain Marvel. Which, I’ll freely admit is more than a little childish, but hey, she as good as killed Iron Man, so I figured that I was justified in taking the position that I did. Then it was announced that Margaret Stohl was going was going to write The Mighty Captain Marvel and being more than a little familiar with her work because I’ve got a teenage daughter (Stohl  is partially responsible for creating the Beautiful Creatures series), I realised that Carol and me, we weren’t quite as “done” as I thought we were.  And Alien Nation is why I begrudgingly found myself sort of warming to Captain Marvel again, feeling slightly hypocritical and almost like I’d betrayed the memory of Tony Stark. Yeah, comics and the relationships that fans develop with them are, well, they’re complicated and more often than not make next to no sense to anyone except the person actually reading the book. Like I said, it’s complicated.

Alien Nation is the story of Carol coming to terms with her actions, and the decisions she made, during the war, how both have affected her daily life, an extra-terrestrial refugee crisis and how it directly impacts her and her powers when she stumbles across an enclave of Kree refugee children being hunted by an unknown, and always changing, enemy.  Stohl’s writing is razor sharp as her rapidly paced plot is equally balanced by her on point, erudite and witty dialogue and involving characterisation which thanks to a combination of historical perspective, interaction with those closest to her and just letting Carol be Carol, actually humanises Captain Marvel and makes her seem less like a single-minded, career driven opportunist and more like a leader driven as much by ambition and endlessly wanting to prove herself as she is by the overwhelming need and desire to do the right thing even when she thinks she’s wrong. The art is fast moving, fluid, detailed and has sense of continuous motion which adds to the stories story’s sense of urgency and velocity and is the perfect foil for Stohl’s narrative. Turns out that I’m not quite as angry with Carol Danvers as I thought I was, and if her continuing adventures are anywhere near as good as Alien Nation is, then I might just be forced to stick around for the long haul. I guess I was wrong about Captain Marvel…  Tim Cundle