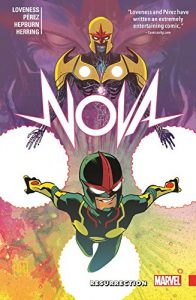 Unless you’re Uncle Ben, death isn’t a permanent state of being in the four colour kingdom. Everybody eventually returns to the land of the living. Except Uncle Ben. However, making their way back to the mortal realm is a lot more difficult for some than it is for others. Take Richard Rider for example. He died a hero’s death in an alternate dimension, the Cancerverse, while fighting Thanos and sacrificed himself for his friend, billions of people he’d never met and would never go on to meet and for the general wellbeing of the entire Universe. And after he died, things moved on. Another Nova, Sam Alexander, rose to take his place in the superhero pantheon, the world kept turning and everyone in every quarter of the inhabited galaxy gave a sigh of relief and a prayer of thanks to whatever superfluous deity they believed in and got on with the business of living their lives.  Then Rich came back, and for the most part no-one really noticed that he had made it home until he made his presence felt by returning to the role of Nova, which alerted his “replacement” Sam and woke the thing that came back with him. Because for Rich, coming back was never going to be easy and the Cancerverse was never going to let him go without a fight and Resurrection is the story of how Rich Rider made it home and the price that he, and everyone around him, is forced to pay so that he can live again.

Alright look, I’m going to say this right form the off and make it absolutely crystal clear. I LOVE this book. Everything about it strikes all the right chords with me. The beautifully detailed, involving and engaging plot, the superb character development, the way said characters interact with other and the resultant relationships that slowly develop between them, the snappy, punchy dialogue and the retro, almost pulp style art that adds a touch of the golden age of Science Fiction to the story. Every facet and part works in wonderful synchronicity to create the incredible whole that is Resurrection. And as well as being a glorious tale of space bound super-heroics and delivering an eleven on the monster-battle-o-meter, Loveness’s story also questions the nature of loneliness, the need to belong and the innate craving that each of us secretly has for acceptance and acknowledgement, reminds the a portion of it’s readership how difficult it can be to talk to girls regardless of how old we are, reinforces the importance of family and fills in the father figure blanks that both Sam and Rich have in their lives as they learn to trust in and rely on each other. Like I said, this book is the real deal. It’s the whole enchilada and hopefully the beginning of something new and wonderful for the Nova Corps. Because two people make a team right? And a team is where things like the Nova Corps begin. So don’t delay, join the corps today and spend a couple of hours immersed in Resurrection. You won’t regret it… Tim Cundle