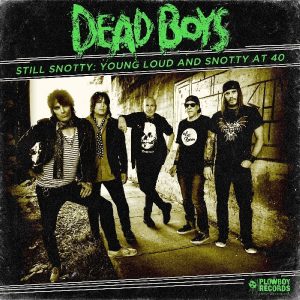 From the ashes of Cleveland, Ohio’s Rocket from the Tombs came the Dead Boys. By 1976 proto-punk was now punk and the Dead Boys’ incendiary Young Loud & Snotty debut landed via Sire Records; an album that seemingly had spit etched in its grooves. Full of ferocious spike and energy, it really is a classic. The demo-like quality needed no sheen as the rawness was captured in all its ugly glory, and rightly so. If you look up ‘punk rock frontman’ in the dictionary you’ll probably see a picture of Stiv Bators. He sported heroin chic before the phrase was coined and he spewed rock ‘n’ roll cool like no other. Stiv was the real deal.

We’re now 40 years on and original Dead Boys Cheetah Chrome and Johnny Blitz have reunited for a rerecording of the punk classic. It comes with the exact same running order as the original but for the omission of Hey Little Girl and the (non) medley that closed the original album. Chrome and Blitz are joined in 2017 by Jason Kottwitz on guitar, Ricky Rat on bass, and Jake Hout stepping in on vocals for the late Stiv Bators.

What we get is a record that’s true to the original as the chugging opening riff of Sonic Reducer never fails to split open your stereo speakers. This is a straight-up take on the tracks as they appeared on that seminal debut with no reworking but for modern day production values. Jake has Stiv down to a tee and we’re in the territory of tribute singers here. Hout fronts the Undead Boys, a zombie take on the Dead Boys and they previously received a glowing endorsement by the legend that is Cheetah Chrome himself. This hook-up now makes sense… sort of.

Is this album necessary? Probably not. Ain’t it fun? For Cheetah and Blitz it’s clearly a blast to be playing these songs together again, especially as they hit the road for the 40th anniversary celebrations. However, the 1977 original is out there on a 2017 repressing for a new breed to discover and for the old guard to relive. I picked one up on snotty green vinyl earlier in the year, pop pickers. For this purist I’d prefer to be caught with the meat in my mouth via the original cuts. Ginge Knievil