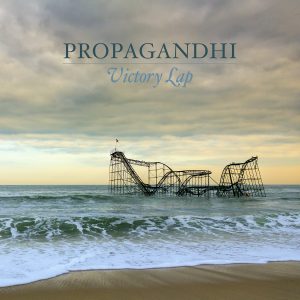 If you’d told me twenty  and some spare change years ago that, barring Lagwagon and NOFX, the band that would roar the loudest and longest from the first wave of Fat Wreck signings would be Propagandhi, I’d probably have raised a Roger Moore style eyebrow and (not so) gently mocked you. While they had vestiges of greatness and an uncanny knack for writing punchy, forthright punk as all heck tunes, I never imagined that they’d stick around for more than two decades and become the kind of band who outstripped and refined themselves and became more relevant with each and every subsequent record. If you thought they were great before, then by the time you’ve played Victory Lap a couple of times, you’re going to think, kind of like I do, that they’re magnificent. Fiercely intelligent without being condescending, smug, self-satisfied or petty and displaying and incorporating a musical technicality that’s breath-taking into songs that are rabidly infectious, Victory Lap is Propagandhi’s masterpiece and the sort of punk rock opus that’s perfectly suited to the turbulent and terrifying times and world that we live in. Victory Lap really is Propagandhi’s finest moment and folks, it doesn’t get much better than that… Tim Cundle