Warning: preg_match() expects parameter 2 to be string, object given in /var/www/vip4/sites/vip6102689/httpd/htdocs/wp-includes/formatting.php on line 4866
 The Last Survivors - Mass Movement
x
Spread the love 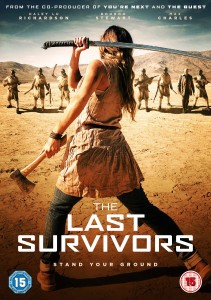 The Last Survivors (Kaleidoscope)
Everything is cyclical, and the chances are, that if it’s happened before, it’ll happen again and with the nineteen eighties resonating so firmly with the second decade of the twenty first century, it was only a matter of time before there was a re-emergence of post-apocalyptic film. Led by the Mad Max films, the genre enjoyed a burst of popularity during the middle of the video decade fuelled by the economic, political and social uncertainty of the Thatcher and Reagan years as art began to imitate life in its cold predictions of a future bereft of hope. ‘The Last Survivors’ shares the same shocking ideas and themes as it’s noted predecessor, but rather than being set in the aftermath of an oil shortage-driven civil collapse and conflict, it begins after a decade of drought has ravaged the US (reflecting the concerns of the age, climate change takes precedence over nuclear Armageddon). With the last few farmers in an unnamed valley fighting to make it through each day, and as self-preservation and protection are all that matters, survival is everything and water is the only thing of value left.

Kendal, a hardened teenager, dreams of finding a way out of the valley along with friends Dean and Alby – a dream reflected in her daily search for a vital component they need in order to repair a light aircraft and make the dream a reality. What little water is left, in their well, is slowly starting to run out and when Carson, the local land baron, along with his henchmen drains the aquafer that supports the wells in an attempt to drive the last remaining survivors to him for help (which he gladly grants with a bullet and a swift prayer), it’s only a matter of time until Kendal and Carson are forced to confront each other in a final, barbaric showdown.

‘The Last Survivors’ is, for want of a better description a stripped down, bare bones, dystopian western, in which the local “gunslinger” (Kendal) seeks vengeance on the ranch owner (Carson) after he’s crushed all of the homesteaders who stood in the way of him owning everything. Thriving on its slow burn and build plot, aided by its stark imagery and lighting (which reflects the black and white nature of life and death, you’re either one or the other and there’s no shades of grey in-between), ‘The Last Survivors’ is a bleak, brutal, merciless and, at times, incredibly violent film which refuses to bow to convention and gloss over it’s difficult subject matter, and even though it’s disheartening and more than a little downbeat, Kendal’s hope of something better lying just beyond the horizon, drives it forward and ensures that the audience keep willing her on, desperate for her to succeed. It isn’t an easy film to watch and it certainly doesn’t hold your hand when the going gets a more than a little rough, but it is a rewarding and strangely captivating film that slowly, but surely, drags you into its story. You’d better forget those shades though, because the future doesn’t look like it’s going to be all that bright… Tim Mass Movement