Warning: preg_match() expects parameter 2 to be string, object given in /var/www/vip4/sites/vip6102689/httpd/htdocs/wp-includes/formatting.php on line 4866
 Legendary Star-Lord: Face It, I Rule - Mass Movement
x
Spread the love 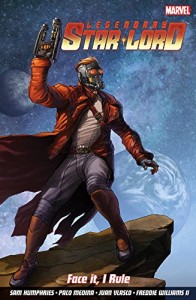 Legendary Star-Lord: Face It, I Rule – Sam Humphries, Paco Medina, Juan Vlasco & Freddie Williams III (Panini / Marvel)
Much as I, and it seems most of the Western world, like Rocket and Groot (because, you know, what’s not to like about a monosyllabic, walking tree and anthropomorphised raccoon), it’s all too easy to forget that the heart and soul, the element that keeps the team ticking even after they’ve had a kicking, is the one and only, legend in everyone’s lunchtime, Star-Lord. Or as he’s more commonly known, Peter Quill. That’s right boys and girls, despite the fact that the Guardians have gone stratospheric, sometimes a man just needs to walk alone, which is exactly, or there and thereabouts, what Star-Lord does in ‘Face It, I Rule’. Okay, okay, I’m sorry. What the Legendary Star-Lord does in ‘Face It, I Rule’. That better? Good.

So, well remember the Cancerverse and what went down between Quill, Drax, Nova and Thanos, right? Well, now that the deal is over and done, Star-Lord sets out to settle the score with Thanos once and for all, but having acquired what he needs to get the job done, runs into a little trouble with a bunch of Badoon bounty hunters and runs afoul of the Orphanage that he was “helping” at the same time. Turns out that a mysterious figure known only as Mr. Knife has put a ‘Blood Bounty’ on his head, a price so large that it’s guaranteed to attract the attention of every long-in-the-tooth and new-in-the-game freelance tracker in the Universe which sends Quill spiralling toward Earth on a journey in which he “meets” family he never knew he had (an encounter that proves that blood is thicker than water and that the apple never falls to far from the tree), ends up in gaol, meets a world-sized monster on a “dinner-date” that goes disastrously wring for one of them, bumps into the only Badoon he doesn’t want to kill, “acquires” a shiny, new, top-of-the-line, pimped out starship, goes head-to-head (or more accurately head-to-knee) with the Mad Titan, decides to turn the blade on Mr. Knife (see what I did there? Blade, knife, see, see? Oh, you did. Right, sorry) and still manages to conduct a sort of long-distance relationship with his not-girlfriend Kittie Pryde. Yeah, life is never easy or straight forward when you’re Star Lord. Exciting, fun and exhilarating, but never easy.

If anyone is going to transform Peter Quill into the legend he things he is, and deserves to be, it’s Sam Humphries with more than a little help from Paco Medina and Freddie Williams II. ‘Face It, I Rule’ is a slick, fun, fast read that’s crammed with fantastic characterisation, witty dialogue and plenty of ‘Ooof, I didn’t see that coming’ moments (although, if you’ve been paying attention, you’ll have a fair idea of who Mr Knife really is) that propel the story along at G-Force inducing speed that, thanks to the beautiful artwork of Messer’s Medina and Williams number II, become indelibly seared on, and in, your cerebellum. It really is true. He does rule… Tim Mass Movement