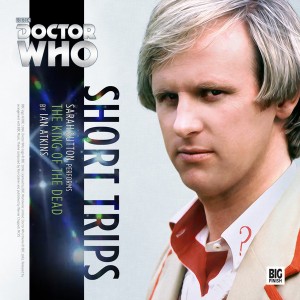 Doctor Who: Short Trips: The King of the Dead – Written by Ian Atkins & Narrated by Sarah Sutton – Download (Big Finish)
“All the world’s a stage and all the men and women merely players….” He was a wise man was old Will Shakespeare, and coincidentally, crossed paths with the Doctor on more than once occasion; which is sort of apt, as in ‘The King of the Dead’, The Doctor, Nyssa and Tegan find themselves in the theatre (albeit in the 1980s) playing their part in a tragic and deadly drama.

Appearing in the right place, at the right time thanks to the Tardis/ Fate/ the Universe or whatever it is that controls their destiny, The Doctor and his companions unwittingly become part of the opening night audience of ‘The King of the Dead’, an immersive theatrical experience that revolves around the abdication of Edward VIII, with a little extra murder for good measure. It’s the brand new hottest ticket in town, only it’s a little too immersive, and the monsters lurking backstage and in the wings are a little too real; and unless the Doctor can step into the breach in timely fashion, the murders are going to become all too real. ‘The King of the Dead’ is a tale of revenge and redemption featuring crashed spaceships, an old UNIT case, extra-terrestrial artefacts and multi-dimensional horrors seeking to feed on the collective psyche of the human race.

Racing along at a pace of knots, the plot allows Nyssa to step forward and take command of the situation, as the antagonists motivation reflects her own personal life, and the divergent journeys that heroine and villain have taken despite the common causality that exists between both, makes for an intriguing and involving thread that bubbles and boils just beneath the surface of the main story. ‘The King of the Dead’ a classic slice of Whovian horror that incorporates the finest pulp science fiction and traditional terror in a very human and very moving, story. Splendid stuff… Tim Mass Movement