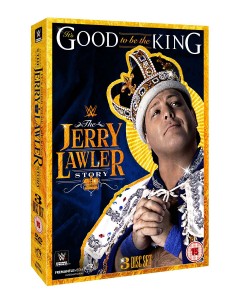 Jerry Lawler: It’s Good To Be The King DVD (WWE)
If Jerry Lawler is remembered for anything in the world outside of wrestling it will be for his infamous encounter with comedian and actor, Andy Kaufman.  Even before I met “The King” when he came to my screens on WWE television in 1993, I had heard of him because, as an avid fan of comedy, in particular Saturday Night Live, I had seen the clip of him pile-driving Kaufman multiple times already.  Lawler was a big deal – yet when he did debut in WWE, I couldn’t understand what all the hype was about.  Instead of the King of Memphis wrestling, the man Bobby Heenan introduced me was a slightly tubby old man.  Sure he held a crown and wore a cape, and he called himself “King”, but when he wrestled it was as a coward…cheating his way to victories with foreign objects hidden in his tights and that dastardly piledriver which appeared to be his only move!

Yet there was something about him.  As much as he irritated me, as much as I couldn’t see the justification for his moniker of “King”, I was always deeply into his storylines.  Mainly because this arrogant and undeserving old fool was always claiming he was better than my heroes like Bret Hart, the Ultimate Warrior, Rowdy Roddy Piper and Jake “The Snake” Roberts. He even had the audacity to call my beloved ECW “extremely crappy wrestling”!

The older I got, and more I understood the business of professional wrestling, the more I realised that Lawler’s cowardly obnoxiousness was intentional.  He was the perfect heel – you hated him because you knew he thought he was better than he was, yet you couldn’t help but laugh as he laid into his enemies via his cutting and hilarious promos.   Eventually he parlayed that brutal wit into a career as commentator, forming a double act with Jim Ross that almost made me forget how much I missed the team of Gorilla Monsoon and Bobby Heenan.  He still commentates to this day, and having become such a part of the furniture of WWE nowadays, this new DVD collection is a tremendous opportunity to be able to go back to the start of Lawler’s career and remember what an important contribution to wrestling history this guy made before he sat down behind the announce desk for good.

As is the usual format for these kinds of things, Disc one is a documentary about the subject, and Discs two and three contain matches and clips to document the stories heard on the documentary.  In the case of “It’s Good to be the King”, there isn’t a bad moment on this entire collection!

The documentary portion is an interesting look at how The King got his start in the wrestling business, how he got his moniker of “King”, the various championships he won over the years, and how he adapted to life in WWE.  It also covers his frightening on-air heart attack, the period of time in which he quit the company following the firing of his wife The Kat, and his memorable Wrestlemania match against Michael Cole.

But the real gems of this collection are in the matches.  Even as a young man, Jerry Lawler basically had only a handful of moves.  Alongside his trademark piledriver and fist drop he had maybe a suplex or two, a headlock, and a lot of kicks and punches.  Yet even without flashy manoeuvres, every single match on this collection tells a compelling story because there is no better storyteller or in-ring psychologist than Jerry “The King” Lawler.

Take the Andy Kaufman match for example – it consisted of three moves: a headlock, a back suplex and a piledriver.  Yet this “match” is still talked about to this day!  As I child, I never remembered the actual quality of Lawler’s many matches with Bret Hart, but who could forget its culmination in a “kiss my foot” match after what seemed like years of brutal attacks and cutting comments?  Throughout the collection we are reminded that whenever Jerry wrestled, he was telling a compelling story, be it his empty arena match with a young Terry Funk, battles for the AWA championship with Curt Hennig and Kerry Von Erich, a casket match with The Undertaker or a throwaway match with jobber Al Jackson, in which the King does his own commentary while wrestling.  But the bigger storylines are where Jerry really excels – his cross-promotional feud with Paul Heyman and Tommy Dreamer that helped put ECW on the map and promote its early pay-per-views, his King of the Ring battle with Roddy Piper that helped revitalise a stale product and his Summerslam battle with Tazz and Wrestlemania bout with Michael Cole, both of which proved that even in retirement behind the announce desk, The King still had it when it counted.  Nowhere is that more evident than in The King’s 2010 TLC match for the WWE Championship against The Miz, where he somehow got us all to believe that even in this late stage in his career, it would really be possible for Lawler to win his first WWE championship at the age of 60!

After watching this collection – which also includes Lawler’s 2007 Hall of Fame induction – it really is tough to think of another wrestler who made every moment between those ropes count as much as Jerry Lawler.  If you think The King is just a voice on commentary, you need to see this to recognise how much more he is than that.  If you already know, then this collection is a glorious celebration of a superlative career.  “It’s Good to Be The King” is a must for any true fan of professional wrestling.  Run, don’t walk.  Dan McKee