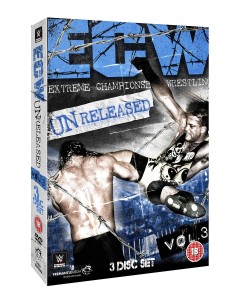 ECW UNRELEASED VOL.3 DVD (WWE)
As much of a fan of ECW as I am, as a rule I am dubious about volume three of any wrestling collection.  When you consider that each of the previous two volumes consisted of three discs, and that this collection will compile all of the matches not only not good enough to be included on the first volume, but not even good enough to be included on the second volume either, there is no other way to approach such a product but as barrel-scraping of the highest order.

I have to say, that initial impression was not discarded as I began to watch – a reasonable opening tag contest between Shane Douglas and Tommy Dreamer versus Kevin Sullivan and Taz has its only point of interest spoiled by Joey Styles in the introduction. A tedious Too Cold Scorpio promo follows, before we see Too Cold have a non-event in the ring with Dean Malenko, then Shane Douglas wrestle to a no-contest with Ron Simmons, and suddenly I realised the true reason that this collection was released: as a pay-day for WWE legends and their friends.  It is the only plausible explanation for the inclusion of the Ron Simmons match, and disc one is fairly heavy on WWE road agent Dean Malenko and recent talking head superstar Shane Douglas.  Other friends of WWE, such as Cactus Jack, Sabu, Tommy Dreamer and Rob Van Dam make their mark, with discs two and three getting heavy on the Dudleys.  However, ECW is so damn good as a promotion that even as I started watching with cynical dismissal, I suddenly realised something – I was really enjoying this latest walk down ECW memory lane.

There is nothing essential on any of these discs – made painfully obvious by Joey Styles and the BWO’s juvenile goofing around between matches, and even more painfully still by the unfunny blooper reel of out-takes we are treated to later – yet every match has something enjoyable about it that makes you watch it anyway.  Before you know it, hours have passed, and you have been wowed by some of the greatest technical wrestlers in the world with legends like Eddie Guerrero, Lance Storm and Chris Candido, some of the most brutal hardcore matches from people like Raven, Tommy Dreamer and Cactus Jack, and some of the best high-flyers like Rob Van Dam, Sabu, Kid Kash and E Z Money.

If two previous discs of ECW highlights didn’t already exist, then this collection would be impressive, but as it is, nearly fifteen years since the original promotion first closed its doors, it is merely an enjoyable enough way to pass some time if you happen to have it, and by no means is this the greatest example of ECW wrestling you could buy.

If you already own the other two volumes and want something new to fill the void, check this set out.  If you haven’t seen the previous volumes, then I would recommend you check them out first.  This one is for completists only. Dan McKee