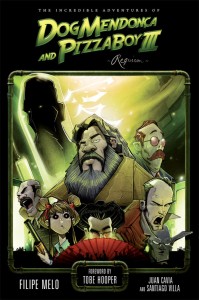 In the final volume of the Dog Mendonca trilogy, a fair bit of time has passed since Dog and crew saved the world. Dog and Pazuul are living a life of luxury when having to pay back taxes takes everything from them and they’re forced to stay with their old friend turned activist and family man, Pizzaboy. However, when the past returns and catches up with them, it means an end for Dog yet also a new beginning for the world as nothing stays buried, normal or even constant in the world of humans when monsters are real and evil is blinded by hate.

Sometimes it’s hard to review a book going into it knowing nothing about what happened previously and sometimes it’s very easy. Requiem, thankfully, falls into the latter category. The team behind this book, writer Filipe Melo, artist Juan Cavia, and colorist Santigo Villa, tried to complete their story with passion and love for something they spent 10 plus years on and throughout most of the book it works wonderfully. The only part that doesn’t really work is the middle section, which seems rushed and incomplete as the action jumps from one thing to something else. The book regains its drive after that when all the players are brought together, though the build-up to this point loses some of its momentum in the aforementioned middle act as such the ending suffers a little. Even with that drawback though, the book was a fun and enjoyable read that makes you want to find out what happened before and between the stories told. Jason Bonton