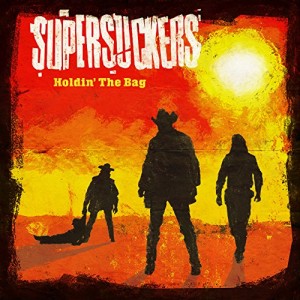 First up, this is a Supersuckers record, so anything goes. Secondly, it does dabble heavily within their love of bonafide country music and there’s no denying that. ‘Holdin’ The Bag’ still has that weighty Supersuckers drawl and high-slung guitar tone, but Eddie Spaghetti has steeped the band’s sound in old school no-nonsense, foot down, rock-n-roll  for this release. The inclusion of a couple of country greats or outlaw singer-song-writers (call them what you will) sees Hayes Carll, and Lydia Loveless reach out at the extended boundaries; a place that’s not unfamiliar to these guys. Along with the up-dated Hank Williams Jr. yardstick ‘All My Rowdy Friends (Have Settled Down)’ ‘Holdin’ The Bag’ actually infuses a fresh breath of air to the twenty plus albums thus far released. With the vinyl only bonus tracked ‘Loaded’ being the closest to original sounds it’s a neat infusion of countrified punk rock that illicits no complaints whatsoever. Hell, even the hillbilly vibe of ‘Georgia on a Fast Train’ will get the pit moving! This is one dutiful slab of high voltage cow-punk. Mark Freebase