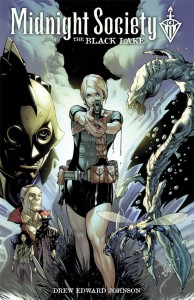 When adventurers and friends Arcturus and Kaycee make a startling discovery in a cave, not only do they find themselves faced with an ethical dilemma, but their years of working together also come to an end. Kaycee goes on to become a renowned cryptozoologist and Arcturus becomes the head of a secret branch of England’s government called MI: Omega. Even with the passage of time and the still raw feelings of betrayal weighing heavily upon him, when Kaycee’s latest expedition to find a rare creature goes missing, Arcturus puts his job on the line by sending a rescue mission to find his old friend, a group with a hidden operative in its midst. An operative who goes by the name, Matilda Finn. When things go bad, Matilda is forced to show who she really is, somehow survive and still keep the secrets of the world she’s found herself in, hidden.

Drew Edward Johnson, who has worked for Marvel and DC, is finally in charge with Midnight Society, the book he’s responsible for creating. While the story is small, it hints at a much larger world in the making with the secrets conspiracies that Matilda becomes swept up in taking centre stage. The script is sharp while not being overbearing by drowning the reader in too much information. It leaves you wanting to know more while you slowly emerges into a world that is both old and new at the same time. The art, also by Johnson, is what first draws you in in, and it is spectacular and emotive while also having more than a  hint of the classic horror comic look from the seventies. Midnight Society: The Black Lake is a good start to what could be a great dark fantasy series that’s brimming with hidden political intrigue.  If the story remains focused and the time is taken to establish all the players that are to be involved, this could become a true comic book classic. Only time will tell though and I look forward to seeing how this story plays out…. Jason Bonton