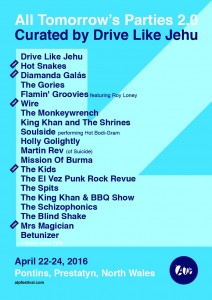 Today, Drive Like Jehu have announced their brand new additions to ATP 2.0 (April 22nd – 24th). Leading the new additions, and featuring Drive Like Jehu’s John Reis, is the critically acclaimed post-hardcore quintet Hot Snakes. Having released three full length studio records, a live album and even a Peel session since their formation in 1999, Hot Snakes return to the UK to exhibit their own blend of raucous garage punk for the first time since 2013.

Critically acclaimed, highly influential conceptual post-punk band Wire have also been picked by Drive Like Jehu to play ATP. Formed in 1976, Wire managed, despite their limited technical ability, to catch up with their punk peers in musical dexterity and sheer velocity through relentless rehearsing. They play now as a band with 35 years experience who still sound explosive and creatively new.

Hailed as one of the most exceptional singers of our time, American avant-garde performer and musician Diamanda Galás has earned international acclaim for her highly original and politically charged performance works. In the past decade, Galas has toured worldwide, presenting the work of living and dead poets who were imprisoned, exiled, or assassinated from/by their own countries, who were in fear for their lives for real or perceived political/moral dissidence: Siamanto, César Vallejo, Ali Ahmad Said Esber, Konstantin Kavafis, Yiannis Ritsos, Miguel Huezo Mixco, Pier Paolo Pasolini, Paul Celan, and many others. Galás is also completing a series new recordings as well as remastered and remixed versions of earlier works to be released in the upcoming year and we couldn’t be more excited to have her perform.

The band will post a new announcement every Tuesday in the run up to the April 22nd-24th festival – so keep checking back; there’s so much more to come! Stay tuned for more music, DJs, films, TV, and everything extra to be announced!

Tickets include weekend festival entry plus 3 nights accommodation + are available now at £199 + b/f per person. Tickets and info here:  www.atpfestival.com/events/atpdlj042016/view/eventinfo